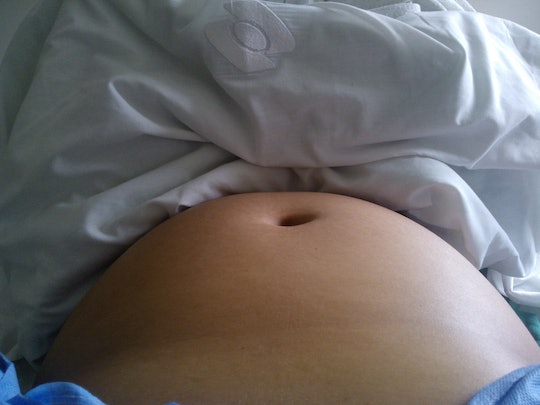 Can I Refuse A C-Section? Yes, But You Still May Have One

If you are expecting and have had your heart set on an unmedicated vaginal delivery, you've likely worried about the emergency scenarios that can alter your birth plan. Medical intervention such as episiotomies and C-sections are often recommended when either the mother, the baby, or both are in danger. Sometimes, however, doctors will automatically recommend a scheduled C-section for pregnant women who have previously delivered via C-section, or in the case that the baby is in a breech position. You may wonder, "Can I refuse a C-section?"

More Like This
Lightning Crotch Can Actually Tell You These 7 Things About Your Pregnancy
Pool Cannonballs Are Pretty Much A No-Go During Pregnancy
Could Increased Anxiety Mean You'll Go Into Labor Soon? Experts Explain
Your Guide To Swimming Postpartum

Associate Professor of Obstetrics at Albany Medical College, Paul Burcher wrote on ObGyn.net that the American Congress of Obstetricians and Gynecologists (ACOG) has taken a clear position on this question stating that it is "not permissible to perform surgery on a patient with decisional capacity without her consent." In the medical journal Reviews in Obstetrics & Gynecology, Neha A. Deshpande, BA and Corrina M. Oxford, MD referred to the American Academy of Pediatrics (AAP) Committee on Bioethics which outlined that “in cases where a treatment poses personal risk to the mother and her bodily integrity, a physician should honor a woman’s right to refuse treatment." So technically, yes, you can refuse a C-section.

Refusing a C-section, however, isn't simply about the patient's wishes. The AAP's policy also states that a doctor may challenge the patient's refusal if, "the fetus will suffer irrevocable harm without the treatment, the treatment is clearly indicated and likely to be effective, and the risk to the woman is low." If the patient continues to refuse the C-section the doctor should consult with a hospital ethics committee but should only petition the courts as a last resort.

Deshpande and Oxford noted that although the American Medical Association (AMA) also discourages doctors from seeking court-ordered intervention when a mother refuses a C-section, their policy reads:

If an exceptional circumstance could be found in which a medical treatment poses an insignificant — or no — health risk to the woman, entails a minimal invasion of her bodily integrity, and would clearly prevent substantial and irreversible harm to her fetus, it might be appropriate for a physician to seek judicial intervention.

The bottom line is that doctors are bound both to respect your choice as a patient, as well as baby's welfare. As a mother, you also carry the burden to weigh how important it is for you to have your ideal birthing experience when doing so can mean putting your child's life, health, and future at risk.