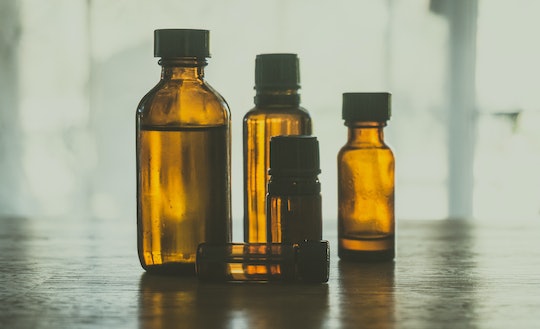 Chances are you know someone who either sells or swears by essential oils. In the past few years, the use of these pressed plants has taken off like a rocket. I must have 10 or 12 friends just in my neighborhood that sell essential oils for a multi-level marketing outfit. You might love them, you might question their validity, or you might just be curious. However, if you're pregnant, there is more than just the efficacy of the product to consider. If you're wondering, "Can I use essential oils while pregnant?" you're not alone.

The use of essential oils during pregnancy is tricky and should be approached with extreme caution. Many of the oils may have unintended consequences like bringing on contractions or causing birth defects, noted The Journal of Alternative and Complementary Medicine. There are other possible consequences as well, like uterine bleeding, hallucinations, and drug interactions that you should consider. Many OB-GYNs won't specifically endorse the use of essential oils or negate their possible benefits because there is a dearth of peer-reviewed, randomized studies to prove or disprove their benefits. However, because there is such risk involved, it's important to have a discussion with your provider before you begin any pharmacological treatment, and that includes the use of essential oils.

Essential oils are the oils collected after pressing many pounds of a botanical ingredient down to its most basic elixir. Often touted as nature's alternative to modern medicine, it's frequently overlooked that nature never distilled these plants and trees down to this level on their own, and when they do press plants by compression, you're more likely to end up with coal than a jar of rose oil. Therefore, the idea that it's a natural alternative isn't entirely true. Traditional medicines like aspirin (from willow bark) and penicillin (from mold) are also formed by manipulating ingredients found in nature. However, they lack the culture cache of the essential oil movement. There's just no money in multi-level marketing of 81 milligram tablets of aspirin.

That's not to say there aren't benefits to some of the oils — there are. Recently, the Centers for Disease Control and Prevention (CDC) published a study that found oil of lemon eucalyptus is on par with DEET when it comes to fighting against mosquitoes. However, it's not safe for pregnancy or young children. Lavender, when used with a carrier oil or diffused, is thought to be a safe remedy for nausea and as a sedative, according to Complementary Therapies in Medicine, but even lavender has its concerns. According to a study, the use of lavender in childhood is linked to gynecomastia in boys.

There's never a perfect medicine, and essential oils are no different.

After you ask your provider about using essential oils during pregnancy, you also need to ask yourself who is selling the oils and where they're coming from. For instance, just last year, essential oil company YoungLiving was sentenced and fined for importing illegal rosewood oil that risked the lives of endangered species and was sourced in an unethical fashion, violating the Lacey Act, according to the Department of Justice. Other oil-selling outlets, like Whole Foods and DoTerra, have not faced the same allegations and are thus far spared this issue.

If you're still considering them, and full disclosure, I'm actually a big fan of diffusing oils, there are some big ones that you need to avoid as per recommendation, noted New Kids Center. They are juniper, aniseed, mugwort, camellia, citronella, laurel, frankincense, jasmine, rose, rosemary, thyme, basil, sage, peppermint, cinnamon, angelica, and cumin.

Always, always ask your provider before taking anything, and that includes adding it to your lotion or diffusing it. It's just not worth the risk.

More Like This
Pelvic Pain During Pregnancy: What Causes It & How To Deal With It
What Is Acid Reflux Tape? Chrissy Teigen Swears By It
D-Mer Syndrome: Will It Come Back Again?
40 Lovely, Lively, Lavish Girls Names That Begin With “L”