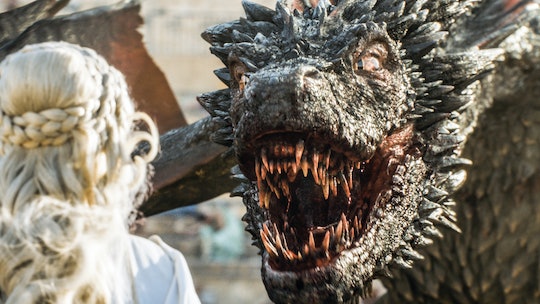 Jon Snow May Befriend Daenerys' Dragons On 'Game Of Thrones'

On Game of Thrones, winter is here, and war is raging on more viciously than ever, both with Cersei in King's Landing and the White Walkers to the North. Luckily Dany has an ace in her pocket in the form of three dragons. But will her newest ally be able to take advantage of them too? Can Jon Snow tame Daenerys' dragons on Game of Thrones? Traditionally, Targaryens are said to have a way with dragons, and we now know that Jon is also a Targaryen (even if he doesn't), so it definitely seems like a possibility.

Dany's dragons are the first dragons seen in centuries, and she is constantly being compared to her ancestor Aegon who conquered Westeros with three dragons himself, with his two sisters riding the other two. Dany's affinity for the beasts is generally attributed to her Targaryen heritage, as well as her seeming imperviousness to fire. Seeing as Jon Snow is also a Targaryen, does that mean he has the same traits? Is he also impervious to fire? Will the dragons also feel a special bond with him because of his bloodline? It's not clear whether these are things particular to Daenerys or to Targaryens generally, but I have a feeling Jon is going to get up close and personal with the dragons very soon.

The prophecy during Dany's time in the House of the Undying stated that the dragon will have three heads, generally interpreted to mean that there will be three people riding dragons when it all goes down (just like what happened with Aegon). The most popular prediction is that Jon Snow will be one of the other people who get to ride a dragon when it all finally goes down. Most theories posit that Jon will form a bond with Rheagal, the dragon named after his real father, and this is the dragon that he will ride in the eventual war with Cersei/the Night King. After all, fire kills wights, so what better weapon to fight the army of the dead?

It should also be noted that Tyrion also seems to have a way with the dragons, based on when he made the decision to set them free when he joined forces with Daenerys. The same people who predict that Jon will ride a dragon, also believe that Tyrion will be one of the three riders. While some believe this means that Tyrion is also a secret Targaryen, others think that affinity for dragons has nothing to do with lineage. Blood-right or not, Jon has already formed a powerful bond with one formidable animal (his direwolf, Ghost), I somehow think he'll be able to do it again.