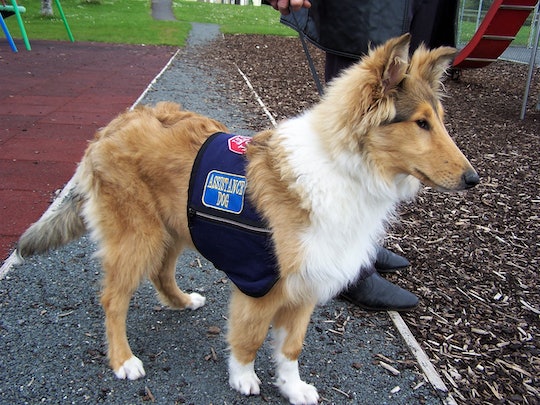 Can Kids Bring Therapy Animals To School? It All Depends

Nothing is quite like the emotional support a warm and compassionate animal can bring to those who need it. It's no wonder parents welcome therapy animals into their child's life as a recommended component of their healing. Although it's easy to mix up the two terms, a therapy animal is not the same as a service animal. If your child's therapist or psychiatrist has prescribed a therapy animal to support them throughout the day, you may be wondering, can kids bring therapy animals to school?

Parents should know the proper classification for the type of animal their child needs. Under the Americans with Disabilities Act (ADA), a service animal is a working animal with special training to assist people with disabilities. That can include calming people with post-traumatic stress disorder during an anxiety attack, according to the National Association of School Nurses. The short answer is, yes: some schools do allow students to bring their own therapy animals to school. The long answer is a bit more complicated.

On the other hand, therapy animals, "provide companionship, relieve loneliness, and sometimes help with depression, anxiety, and certain phobias, but do not have special training to perform tasks that assist people with disabilities," according to the ADA National Network, an organization that provides information, guidance, and training on the ADA.

Therapy dogs do not count as service animals in the federal definition listed in the ADA, per a booklet published by the ADA National Network. That doesn’t automatically rule out bringing a therapy animal to school, but the organization reports that schools seldom allow them. Although Daily Progress reported that Jackson-Via Elementary School in Charlottesville, VA, uses a staff member's therapy dog for targeted interventions with students, Krissy Vick, community relations liaison at Charlottesville City Schools, confirms it's not common for their students to bring personal therapy animals. "We have not, that I am aware of anyway, had a student who has brought an emotional support or a service dog to any of our schools. And so far, no one has requested to bring a therapy dog to school," she tells Romper. The regulations and requirements parents need to know regarding therapy animals often vary per school, so it's important to contact your local school district for information.

Even though therapy animals are not specially trained to work with people with disabilities, they still should be registered as a support animal, especially when kids are involved. Depending on the organization the handler and therapy animal team is registered with, they may have to undergo a rigorous initial on-site evaluation or do a re-evaluation every two years, school counselor and registered therapy dog handler Jennifer VonLintel tells Romper. VonLintel and her dog Copper have worked as a team providing emotional support to students and staff at B.F. Kitchen Elementary in Loveland, Colorado for the past eight years. according to USA Today.

Sometimes parents of students may feel concerned about having therapy animals or service animals in schools if their child is allergic to pet dander. Under the ADA, public schools may not deny a student with a disability the use of a service animal because of another child's allergy. "If a student requires a therapy animal and another student has documented medical issues, we would accommodate the needs of both students," says Raven Hill, Communications Officer for Prince George's County Public Schools in Maryland.

VonLintel agrees that in cases where one student has an allergy, the school may assign the children to different areas of a room or the building. Sometimes, if a student is allergic to pet dander but wants to connect with Cooper, she allows the child to interact with the dog via sign language, without physically touching him.

In some instances where kids have had therapy animals at school, the district may have a contract with an outside organization to provide the animals for the entire school population, including staff. Elise Samet, a volunteer coordinator with Canine Assisted Therapy in Oakland Park, FL, works with teams of handlers and volunteers to provide therapy dogs to Marjory Stoneman Douglas High School (MSD) of Parkland, FL, since the tragic shooting on February 14, 2018.

“For the past year and half, Canine Assisted Therapy teams have been at MSD nearly every day providing canine support. The dogs’ presence has allowed students to relax, open up, and feel more comfortable returning to the classroom,” Samet tells Romper.

It is awesome when children who need it have the affection of a therapy animal at school to help get them through their day and serve a vital role in their emotional well-being. However, the law currently doesn't provide protections to therapy animals or their handlers in public settings. Outside of exceptional cases, most kids with therapy animals will just have to wait until they get home from school to hug their furry friend.