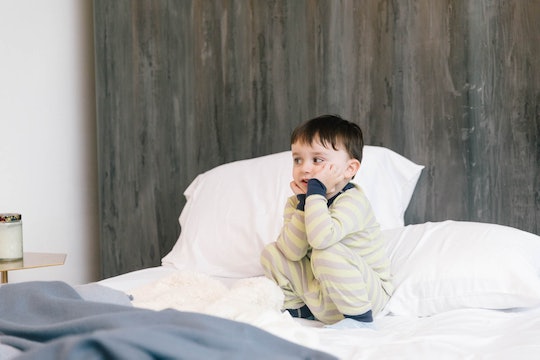 Here's How Your Kid's Memories Work Before They Turn 3

My husband and I are planning a summer beach trip with our four little boys, ages 8 years to 5 months old, and we couldn't be more excited about it. Our oldest two are already giddy about the event, and I feel pretty sure that even the preschooler has a good chance of remembering it forever. But it bums me out to consider the possibility that our 2-year-old might have no recollection of the vacation later on. Can my kid remember anything before age 3, or should I plan on resigning myself to snapping extra pictures for the memory book?

According to educational and developmental psychologist Dr. Oksana Hagerty of Beacon College in Leesburg, Florida, it depends on the kind of memory you're talking about. Remembering people and faces, for example, happens early. Hagerty tells Romper, "Most researchers agree that by the age of 2 months, infants can discriminate among other individuals and even among their moods. So they remember the person and remember the face. The memory of their own face comes after the age of 1."

By age 2, the memory for words emerges, as evidenced by the toddler language explosion when children learn up to 40 words a week. Around the same time, Hagerty explains, their visual-spatial capacity grows, too. For example, they can remember their way between various locales.

A child's memory is displayed in an impressive way — but with unfortunate results — around age 4 with the advent of the capability of lying. "As bad as it is, from a psychological standpoint it is a great achievement," Hagerty explains. "This is when children are able to exercise advanced memory of what other people may or may not know."

All of these are important forms of memory, but at what age are children able to recall isolated events? According to Popular Science, there is a mysterious phenomenon commonly referred to as "childhood amnesia," where children remember very early childhood memories for a time, and ultimately lose them around age 7.

Why is it that memories once retained get lost later on? Canadian researchers suggest that its because of all the new cells grown in the hippocampus during infancy. The process is known as neurogenesis, and the explanation is simply that with all the new cell growth, our brains simply aren't storing memories that would otherwise be long-term ones.

The good news is, we as parents can affect how well our kids may remember specific events, researchers noted by Popular Science suggest. Asking leading questions to prompt the child to process their experience in more detail and with their own descriptions has been shown to help kids retain earlier memories.

For example, since my 2-year-old has adequate verbal skills, asking him questions about our beach vacation while it's happening and directly after may help solidify those memories for the long-term. Questions like, "What happened?" and "What did you see?" might seem simple and even unnecessary, but science indicates that they may not be as insignificant to a child's developing brain as we think.

My husband swears he remembers climbing out of his crib at a year old. It's possible that he simply remembers hearing his mother tell the story many times throughout his childhood and he's assigned a memory to the tale that wasn't the original, but I'm inclined to believe that its real. As for my own kids, there are definitely some parenting moments I'd prefer they not remember, but a family vacation isn't one of them. For that, I'll do my best to make memories for everyone. (But will still take pictures, just in case.)