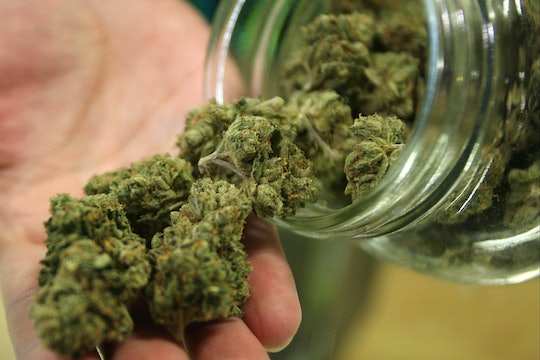 Adults with cancer often turn to using medical marijuana to relieve the side effects of chemotherapy, but can kids with cancer use medical marijuana, too? A new study published in Pediatrics found that many pediatric oncologists would feel comfortable recommending it for children for the very same reasons they would offer it to adults, since it eases the pain, nausea, and lack of appetite that comes along with cancer treatment.

However, those pediatricians who were already licensed to write prescriptions for medical marijuana were way less likely to say they would offer it to children — but not for the reasons you might think. The study found that because of discrepancy between federal and state laws, most doctors fear that giving marijuana to sick kids could get them in trouble with federal authorities, even though it's legal in their state.

So many of the docs who would refrain from recommending marijuana to kids aren't doing so because they don't believe in its efficacy, but because it would go against their hospital procedures or their own fears of getting in trouble.

It is not surprising that providers who are eligible to certify for medical marijuana were more cautious about recommending it, given that their licensure could be jeopardized due to federal prohibition. Institutional policies also may have influenced their attitudes. Lurie Children's, for example, prohibits pediatric providers from facilitating medical marijuana access in accordance with the federal law, even though it is legal in Illinois.

The survey included talking to 288 pediatricians in Illinois, Massachusetts and Washington, all states that have made medical marijuana legal. According to the research, nearly a third of them had received one or more requests for medical marijuana and 92 percent of those doctors were willing to help kids with cancer access it. The laws and the lack of industry standards about dosing and potency were the biggest barriers to recommending it, the study found. Only 2 percent of doctors said that they would never consider marijuana for pediatric patients.

In addition to unclear dosage guidelines, the lack of high quality scientific data that medical marijuana benefits outweigh possible harm is a huge concern for providers accustomed to evidence-based practice. We need rigorously designed clinical trials on the use of medical marijuana in children with cancer.

Which is in line with the current recommendations from the American Academy of Pediatrics, which sanctions medical marijuana use for kids with "life-limiting or seriously debilitating conditions."

Luckily, more research is underway. The Children's Hospital of Philadelphia just entered into a new study to examine medical marijuana's efficacy for kids with autism, according to PhillyVoice. Currently, the Autism Research Center endorses doses of medial marijuana as an alternative to pharmaceutical treatments for the anxiety, aggression, and panic disorders that come along with autism.

Usually, doctors and cannabis experts recommend marijuana strains with high Cannabidiol (CBD) levels as opposed to strains with high tetrahydrocannabinol (THC) levels. THC is the psychoactive element in weed, which means that kids don't get "high" in the colloquial sense of the word, but get all the benefits of weed from either tinctures or edibles (instead of having kids smoke it) administered by their parents.

A 2013 study from the National Institute of Health found that marijuana might be the perfect treatment for ASD, since the symptoms of autism are possibly caused by a blockage of the body's natural production of endocannabinoids, which medical marijuana can alleviate.

A study published last year in the New England Journal of Medicine also found that there was a 40 percent drop in seizures among kids who used medical marijuana as treatment, according to NBC News, so there are obviously tons of potential benefits that need to still be explored.

All of these alleged benefits — and the willingness of pediatricians themselves to allow kids to try it — seem to indicate that researchers need to thoroughly look into the safest ways to give kids doses of medical marijuana for any chronic condition.