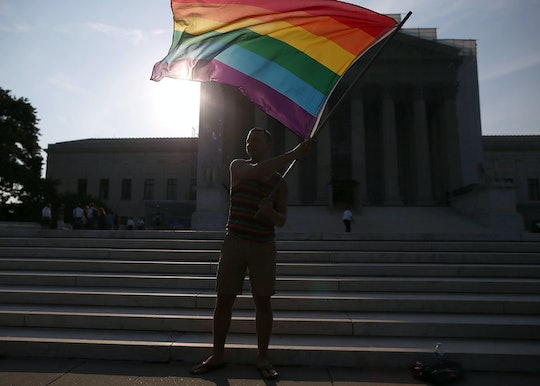 On Thursday, Donald Trump is expected to sign an executive order in the name of religious freedom. The order would give broad protections to any individual, organization, or non-profit that chooses to discriminate against people based on their own religious beliefs, according to drafts of the order that were leaked earlier this year. Already, civil rights organizations are pledging to take action if the order is signed, but it's probably not likely that LGBTQ parents could sue the White House over the religious freedom order right away. That doesn't mean there's not a way to fight it, though.

Organizations like Lambda Legal and the American Civil Liberties Union are ready to file suit on behalf of all Americans if Trump signs the order on Thursday, though there hasn't been any official confirmation from the White House yet that he will do so. But the LGBTQ community and their allies are ready to go if he does sign the order.

Lambda Legal senior counsel Camilla Taylor told BuzzFeed News, "We will fight this with everything we have. We are prepared to sue in a very short timeframe if the executive order closely resembles the leaked drafts.”

The same goes for the ACLU. James Esseks, director of the ACLU's Lesbian, Gay, Bisexual, Transgender, & HIV Project, said, "We are ready to sue if they do something that authorizes discrimination. If Trump signs an order like the one that we saw a couple months ago, it would violate the Equal Protection Clause of the 14th Amendment and the Establishment Clause of the First Amendment."

So if you're worried about the order, keep those donations coming to both the ACLU and Lambda Legal, since they're already ready for a clean fight.

In February, a leaked version of a draft of the religious freedom order allowed "any organization" to "protect their religious freedom" by denying any number of services or benefits to people.

The order, if signed in its previous form, would allow any organization to refuse any service at all to an LGBTQ person or parent, including health care, employment, or housing. Basically, the order would legalize discrimination of the LGBTQ community. The leaked draft drew criticisms from civil rights groups back in February, which led to the Trump administration reportedly rewriting the order. But sources close to the White House told Politico this week, just days before the proposed signing, that not much has changed from the original draft and that "the language is very, very strong."

Trump is expected to sign the order on Thursday. Coincidentally, Thursday is also the National Day of Prayer and there's going to be a gala hosted by the Becket Fund that night to mark the occasion. In honor of the National Day of Prayer, the Becket Fund will honor Leonard Leo on Thursday night. Leo has been a lobbyist for the religious freedom order and was also a part of the advisory team helping Trump choose a Supreme Court nominee.

Leo helped Trump choose Justice Neil Gorsuch, who was confirmed earlier this month and once upon a time voted in favor of Hobby Lobby while on the 10th Circuit Court of Appeals. Hobby Lobby is a company that took its case all the way to the Supreme Court of the United States, thanks to the rulings of judges like Gorsuch. Hobby Lobby alleged that it shouldn't have had to cover women's reproductive needs in its healthcare plan and won the case. The executive order Trump might sign on Thursday would make it so that companies like Hobby Lobby would be able to discriminate at will, all the time.

It's not just the newest Supreme Court justice and his cheerleaders that would be happy about Trump signing a religious freedom order on Thursday. Vice President Mike Pence signed the Religious Freedom Restoration Act when he was the governor of Indiana, which gave the same sort of protections to organizations that want to discriminate against people. In 2015, Indiana passed an amendment to the law that protected the LGBTQ community in the state, despite pushback from some of Pence's supporters.

If the presidential religious freedom order is signed on Thursday, civil rights groups will take action. If it becomes law, LGBTQ parents and individuals should get in touch with the ACLU or Lambda Legal to sue for their rights. In the meantime, everyone can speak out and shine a light on the situation.