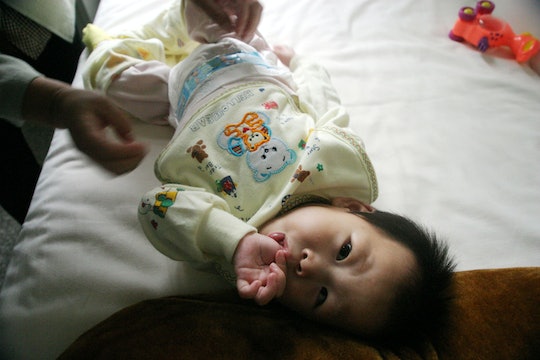 How Low-Income Families Can Get Cheaper Diapers

Though diapers are an inevitable expense anticipated by expectant parents, the ultimate total cost of keeping your baby clean and dry is pretty significant. For some families, this cost cuts a little deeper into their monthly budgets. So can low-income parents get cheaper diapers? Seeing as they're a necessity, you'd think that a helping hand would be extended.

More Like This
Meghan Markle Reportedly Doesn't Want "A Big Baby Shower" As Her Due Date Nears
Mandy Moore’s Son & Hilary Duff’s Daughter Had The Cutest Play Date Ever
18 Best Sand Toys In 2021 For Babies, Toddlers, & Kids
You Will Not Regret This Perfect Baby Pool From Target

Families can expect to easily spend $50 a month on diapers alone, with some studies even estimating that diapers cost $70-$80 per month. Combined with other needs like formula, food, and clothes, it all quickly adds up to thousands of dollars a year. There are definitely some workarounds that are available which can help to make diapers a little bit cheaper. If families have the resources to to buy diapers in bulk, perhaps through a wholesale membership, the cost per diaper goes down significantly. Internet access and with it the ability to order diapers online has the same effect.

But, unfortunately, these other routes aren't available to everyone. What's more, there's no government aid for low-income families in need of curbed diaper costs. In fact, Medicaid and food stamps don't help pay for diapers at all (or toilet paper, laundry detergent, or even soap, for that matter). In 2016, a series of White House initiatives were started in order to close the "diaper gap" (the name for the disparity in cost between low-income families and others) by linking up with private companies and non-profits alike in order to donate diapers to low-income families. Still, this was an Obama-era initiative, and not an existing government policy.

Even though the government hasn't come through in making diapers a little more affordable for the families that badly need them, other non-profits and private movements are still working to help low-income parents out. The National Diaper Bank Network, for instance, is committed to fighting the discrepancy through various actions; In fact, Sept. 25 to Oct. 1 marks their Diaper Need Awareness Week. Furthermore, diaper drives happen around the country all the time, as groups collect resources to be redistributed later. Even some bloggers are doing their part, diligently researching and putting together lists of ways to get diapers for free. Whereas these options by no means solve the issue, they do help alleviate some of the undue stress.

Low-income families have plenty on their plates, so any efforts to make diapers cheaper are much-appreciated. Private, non-profit, and government initiatives help make a dent, but actual policy reforms would make a greater, more permanent impact, for parents and babies alike.