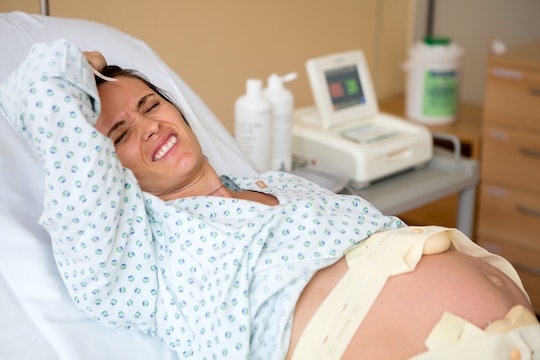 As it would happen, there is virtually no scientific literature devoted to the study of masturbation during childbirth and its effects. All there is are a few doulas spaced across the globe, touting the supposed benefits and possibilities of the "Orgasmic Birth." There have been no peer-reviewed studies, or even enough data to pen into a data set to be analyzed. This is the maternity equivalent of a baseball coach telling a hitter that he can slam a home run by choking up on the bat, because he's seen it done a few times, his players seem to be on board, and now he's got a video to sell, so get to choking.

Honestly, I didn't want to know what my vagina looked like, let alone what I might find digitally, and I certainly didn't want my husband's calloused hands playing around down there. Not to mention the fact that my OB-GYN would've seen it all go down — literally — and there's just no coming back from that for me. I'm not an exhibitionist.

The Skeptical OB, Dr. Amy Tuteur responded to this idea quite simply on her website. She wrote that much of the hormonal responses of the body are achieved with the work of hormones that serve more than one function. According to her, hormones like cortisone, oxytocin, and others may work in various ways, but that doesn't mean they'll work how you direct them.

She argued that this is just the wild imaginations of super privileged white women looking to capitalize or sensationalize an aspect of life that sparks interest in a large population of women. Tuteur noted in her article that these doulas advocating this practice are possibly creating harm, convincing women that they should be able to have such control over their own bodies as to achieve sexual pleasure even as they are doubled with the pain and emotional turmoil that accompanies childbirth.

I've searched for hours and hours looking for some strain of basis of this in the historical obstetric and midwifery record. There is no precedent for this. Yes, you should have autonomy and control as much as can be expected over your birth, but you also shouldn't be deluded with false hopes or expectations. In the end, how you birth is between you and your provider, and you will make the best decisions for your moment. That's how you'll do you.