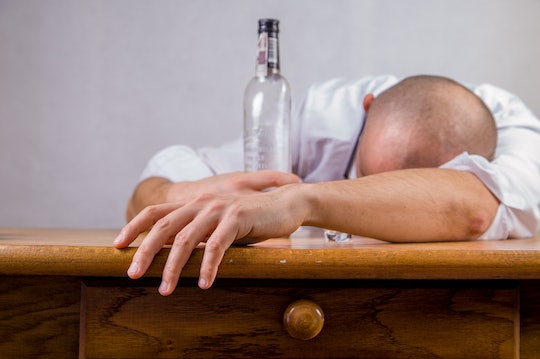 Can Men Who Drink Really Give Their Babies Fetal Alcohol Syndrome? One Study Says Yes

For women there are a lot technicalities and specifications involved while trying to get pregnant. While some women regulate their cycles and take vitamins to aid contraception, it seems like all men have to do is just show up. However, a recent study shows that sometimes a man's health is important during contraception — and could have lasting effects on the child. Which leads to the question, can men who drink really give their babies fetal alcohol syndrome?

According to a recent Georgetown University study, yes they can. So men looking to start a family might need to say goodbye to their days of knocking back one too many beers after work and getting a little too crazy with shots of tequila at the bar. This group of researchers says that frequent alcohol abuse can lead to consequences for the little ones too.

According to the study, a newborn can be diagnosed with "fetal alcohol spectrum disorder" (FASD) even if their mother has never had a sip of alcohol in her life. "Up to 75 percent of children with FASD have biological fathers who are alcoholics, suggesting that pre-conceptual paternal alcohol consumption negatively impacts offspring," Joanna Kitlinska, the study's senior investigator, wrote in the paper.

That's a scary thought, of course. But this is just one recent study. Is there any other evidence that proves this claim?

In 2014, a Korean study found the same kind of results — except in mice. Male mice were exposed to alcohol in different degrees of concentrations for a span of seven weeks and the female mice were never exposed to alcohol at all. The study found that there were "severe fetal abnormalities" when the male and female mice mated and there were more developmental abnormalities as well.

But that's mice — not humans. Are there any other studies of humans that claim the same? Does a man's health really affect his offspring that early in the game?

It seems there may be at least one: In 2014, a Dutch study linked weekly alcohol consumption to lowered sperm count in men who drank over 25 beers a week —which seems like a lot (until I remembered how much my ex drank in college). While this has nothing to do with FASD, it plays a significant role in contraception where males need to be held responsible as well.

Perhaps the most overarching message of the recent Georgetown study is not about FASD but about the lifestyle choices made by men who are looking to conceive. In addition to the FASD findings, the study also found something very important about the health of males.

"Our study shows the same to be true with fathers — his lifestyle, and how old he is, can be reflected in molecules that control gene function," Kitlinksa said. "In this way, a father can affect not only his immediate offspring, but future generations as well."

While having good health is something that all men and women try to achieve, for males it might be more relevant now than ever. So for the sake of your children and great great grandchildren, men — reconsider that sixth beer. It might just make a difference.