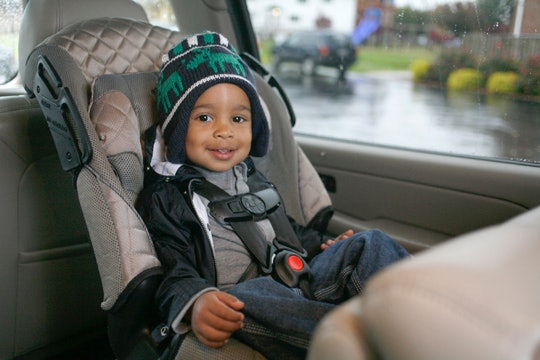 Trying to get a kicky 1-year-old into a rear-facing carseat can be an athletic challenge. I've seriously tweaked my back trying to get my flailing little one up and in, and don't get me started on trying to load her up when she's over-tired. Plus, when I do achieve that much-needed car nap, those rear-facing seats make it nearly impossible to do the ninja-like 'scoop and transfer move' to get her inside. So can 1-year-olds can ride in front-facing car seats? Because it would make managing and maneuvering a wiggly tot so much easier.

The answer to that is that it depends on the state you live in, and AAA has a breakdown of each state's car seat laws. However, if you were to ask if your 1-year-old should sit in a front-facing car seat, the definitive answer to that is a resounding "No," according to the American Academy of Pediatrics, who recommend keeping your child rear-facing until the age of two, or to the highest weight and height allowed by the carseat manufacturer. To be honest, I was a tad bit disappointed by that answer, but once I heard some of the reasons why, I started wondering if I could maybe keep my kid rear-facing well into adulthood, or at least until she gets her own driver's license!

"Car seat research has shown that children up to 23 months old are about 75 percent less likely to die or sustain serious injury in a rear-facing car seat than a forward-facing one," according to Consumer Reports.

So what exactly makes rear-facing the superior carseat position? The answer lies in the protective "shell" a rear-facing car seat creates for your child's must vulnerable body parts. “A rear-facing car seat cocoons the child, absorbs the impact of the crash and keeps the spinal cord aligned. Conversely, when a child is facing forward during a frontal crash, the head, neck and spine are propelled forward even as the torso is secured," reported The New York Times.

Using sled tests (also known as crash tests) and dummies, researchers have studied rear-facing and forward-facing carseat positions, and the findings show that rear-facing restraints are able to better distribute crash forces over a bigger area, thus reducing the force put on a young children's weak necks, according to the Association for the Advancement of Automotive Medicine (AAAM).

It is for this reason that the country of Sweden, which has some of the lowest rates of automobile-related deaths in the world — recommends keeping children rear-facing in their carseats until the age of four, according to the AAAM. Yes, you read the right — four!

If you're wondering how that's even physically possible, it's because their carseats are much different than the ones we use in the United States. Swedish carseats are designed to provide more legroom for the rear-facing child, explained the Washington Post.

While the US might never match Sweden's recommendation of having kids be rear-facing until well into preschool years, the laws in many states are indeed starting to change. "Most states require that children sit in rear-facing car seats only until age 1, but that recommendation is changing across the country. Currently, nine states have passed legislation requiring that children sit rear-facing until at least age 2," explained The New York Times.

So we know that keeping tots in the rear-facing position is best for their safety, but how can we make it best for our sanity — as in, not losing our minds when our one-year-olds kick, scream and squirm while we try to get them in there?

The trick just might be letting them feel like they're running the show, giving them choices as you attempt to get them strapped in. "So when approaching the vehicle the trick is to ask something along the lines of: “Do you want me to lift you into the car seat? Or do you want to climb in by yourself like a big kid?” advised Fatherly.

I know I'll be trying that trick, and also shamelessly bribing my daughter with her favorite car snack and total control over the playlist.