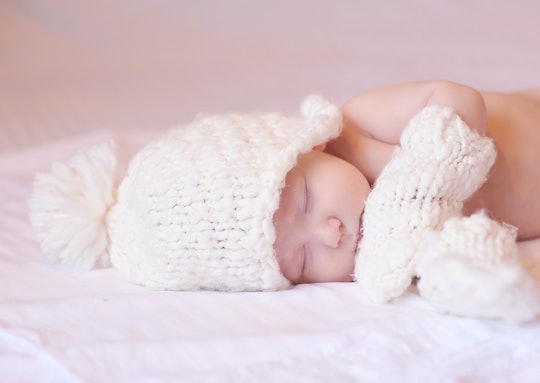 Can My Baby Sleep With Mittens On? Sleep Experts Have The Answer

If you're surprised the #MommyWars extend to the topic of baby mittens, you're not alone. Who knew those teeny tiny mittens could be such a point of contention? Alas, those damn finger holders have elicited more than a few spirited debates, opinions, and questions. You know, inquiries like, "Can my baby can sleep with mittens on?" But because the scientific research is a little feeble at the moment, this particular inquiry is one of those questions best left to you, as a parent, to decide for yourself and your unique family.

Baby mittens are designed to protect babies from themselves. Because they can't yet control their limbs and can flail about, Today's Parent says babies are also prone to scratching themselves in the face with those little, razor-sharp fingernails that are nearly impossible to keep perfectly trimmed.

The drawback to baby mittens, according to Parents, is that it keeps babies from having their hands free, which would allow babies to learn how to actually use them. Critics argue that keeping baby mittens on your baby limits their motor skill development and keeps them from learning how to grasp certain objects.

Realistically, if your baby is young enough that they need mittens to protect themselves from scratching, they're probably also young enough that they should (or at least could) be swaddled while they sleep. Swaddling would solve the mitten/sleep conundrum quite quickly, because swaddling means your baby's hands are trapped under a blanket.

If you're concerned about your baby's motor skill development, but worry that their sharp fingernails will slice up their soft skin, Parents advises you to consider the following compromise: keep mittens on your baby at night, but make sure to let your baby have some time without them during the day, especially during his or her awake time.

There are other things you can do during baby's awake time to encourage motor development in infants. For example, and according Parents, caregivers of infants should make sure baby is spending enough time on their belly, in order to help them strengthen their back, shoulder, arm, and hand muscles.

While many parents complain that their babies hate tummy time, there are a few things you can do to minimize any resistance coming from your little one. You'll want to start early with your baby's tummy time, if possible, by resting them on your tummy and encouraging them to pick their head up. "A newborn's head grows significantly in the first month," says Judy Towne Jennings, a spokesperson for the American Physical Therapy Association. "If her neck muscles don't strengthen and grow during this period as well, tummy time will be much harder.""

After that first week, try placing your baby on his or her tummy for just a minute or two a few times each day. Getting down to their level on the floor to keep them company can also be the key to keeping them from fighting this particular (and not to mention new) position.

Another way to encourage motor skill development is to try a baby gym with toys that dangle down and/or in front of your baby. Those hanging toys encourage babies to start batting at things they see, which will inevitably aid them in figuring out how to use their hands.

More Like This
What Parents Need To Know About Sleep Training & Breastfeeding
When Can A Baby Sleep On Their Stomach? Doctors Weigh In
Why Does My Baby Cough While Breastfeeding? Experts Explain
When Does A Baby Recognize Their Father? A Pediatrician Explains
What Parents Are Talking About — Delivered Straight To Your Inbox