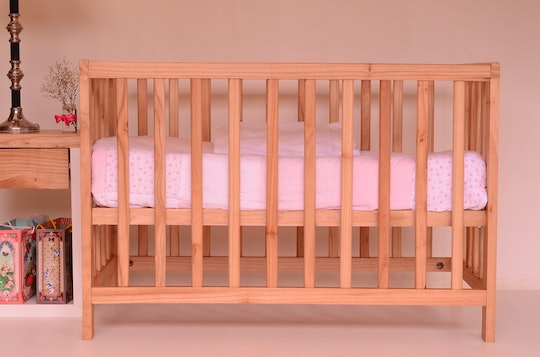 Babies are wriggly little creatures. Even in the depths of sleep, many babies move in a way that would impress a professional contortionist. These slumbering antics might concern parents, though." Can my baby's legs get stuck in the crib bars," is just one question parents may wonder about.

It is somewhat common for babies to get caught in the crib. According to ChildrensMD, babies who are 7 to 9 months old are particularly prone to getting legs or feet stuck in the slats of the crib. Upset and unable to free the limb, these babies will cry until help arrives (and then promptly get the other foot stuck between crib slats). It is a rough situation for everyone.

Although this scenario is concerning for babies and parents alike, the risk of injury from getting stuck in the crib slats is relatively minor. According to the United States Consumer Product Safety Commission (CPSC), the space between crib slats can only be 2.38 inches wide or smaller. As long as the crib meets the CPSC standards, a foot or leg might get caught between the slats, but nothing more. The baby's head or torso is not likely to get stuck.

Additionally, the risk of a serious injury, such as a broken limb, is low. As chairperson of the American Academy of Pediatrics SIDS task force Rachel Moon explained to CNN, babies may be uncomfortable with a leg stuck in the crib slat, but the condition is not likely to be life-threatening. It creates an awkward moment for the baby, to be sure, but nothing that should require an ambulance.

Still, getting up 15 times a night to free the child's foot is far from an ideal situation, so many parents consider using a crib bumper. Hey, it is one way to make sure the kid's limbs stay put, right? Maybe not. According to Baby Center, crib bumpers pose a suffocation risk, as they may impede air flow to the crib. Even the mesh liners are not recommended.

Instead, consider using a sleep sack for babies who are under 1 year of age, as recommended by the Riley Hospital for Children. It prevents them from attempting to break out of the crib while offering warmth and comfort. For what it's worth, though, stuck limbs are a problems that will not go on forever. Soon enough, the baby will be too big for any appendages to get stuck in the crib slats.

More Like This
Even If Your Baby Sleeps Better in Your Bed, It’s Still Not Recommended
When Does A Baby Recognize Their Father? A Pediatrician Explains
What To Do If Your Toddler Keeps Taking Off Their Diaper At Night
How To Celebrate Baby’s First Valentine’s Day, From Gifts To ’Fits
What Parents Are Talking About — Delivered Straight To Your Inbox