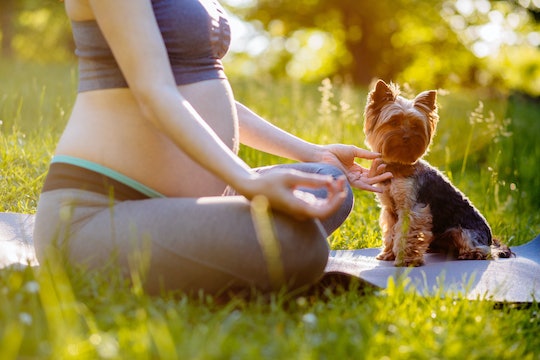 Dogs May Have Good Hearing, But Here's What They Can Really Decipher Inside Your Womb

I have always had dogs; doggos just make life so much better. They're so devoted and loving, and make perfect companions. But dogs can also be curious creatures, prone to noticing things we simply cannot perceive. I swear that my dog can see ghosts or death eaters or possible floating dust motes I cannot see in the corner of the room when she stares for days. But when I was pregnant, my dog was legitimately obsessed with my belly, lying across it all the time. I wondered, can my dog hear my baby's heartbeat? I mean, it seemed like she knew something was in there.

According to research in The Veterinary Journal, dogs hear much more than any human, but their hearing is ultra-sensitive. Therefore, because they can hear a lot more than we do, they're much more susceptible to background and ambient noise, and because they're dogs, they have a diminished capacity to filter and recognize these sounds. Think about it. You may have great hearing, but if you're at a Beyoncé concert, it's going to be hard to hear your friend whispering that they need to go to the bathroom. To a dog, the sounds your body makes — especially during pregnancy — are a constant Beyoncé concert. They adore it, and would wait in line for hours to see it, but making out something as small as a heartbeat in the melee is next to impossible.

While dogs hear incredibly well, they're nowhere near the best-hearing animals on the planet. Bats, porpoises, and whales have much better hearing, according to research at Louisiana State University. Heck, even cats hear better than dogs, but they'd never deign to admit it, or look at you when you say their name over and over again. But if you open a can of Friskies in a 50-yard radius from my two jerkface cats? Behold, you now have two furballs yowling at you and rubbing all over your legs.

The tricky thing is that hearing is measured and understood by hertz — or units of frequency and amplitude. Being deaf/hard of hearing, this is something I am acutely familiar with. Every time I go to the audiologist, they're testing me for my range of hearing. The higher the number, the higher the pitch I can hear. Lower and softer tones are represented by lower numbers. Also, a bit science-y here, but when you're looking at hearing, and your ability to discern sound, you're also looking at how sound registers in your ear canals, against the bones in your ears, and to the nerves, tympanic membrane, and the hollow places of your skull. In dogs, the anatomy is such that they can direct the muscles of their ears to shift where the sound lands, noted Behavioral Neuroscience.

Sound is tricky. According to Explain That Stuff, sound waves are hugely effected by obstructions and distance. Every barrier between the ear of the listener and the sound produced makes it harder to hear because the sound waves begin to bounce back and lose energy. The fetal heart is a tiny thing, with a newborn's heart no bigger than the size of his tiny fist, according to the Pediatric and Congenital Electrophysiology Society. Couple that with the layers of skin, fat, muscle, uterus, and all of that pumping blood and amniotic fluid, it's extremely unlikely that your dog can hear your baby's heartbeat in the womb. However, according to Petful, they can likely hear your baby's movement, and it's possible they can even smell the changes in your body that accompany pregnancy. Dogs' ears are great, but not quite supersonic.