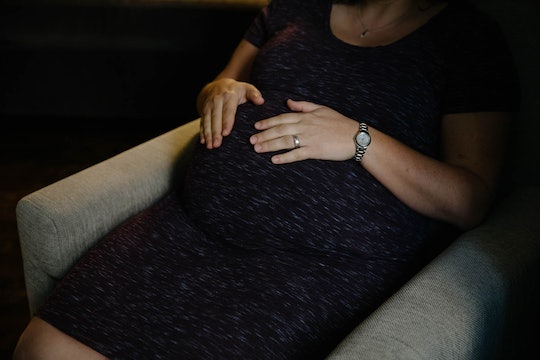 Can My Partner Vape While I'm Pregnant? Experts Weigh In

Most women, I assume, know about the dangers of smoking while pregnant. And while things are constantly being taken off, and put back on, the list of things that are to be avoided during pregnancy, smoking is definitely a solidified point: highlighted, underlined, and in bold print. But what about partners of pregnant women? How should they behave? Can my partner vape while I'm pregnant? Turns out, according to experts, the answer is a tad complicated.

Because of the chemicals inhaled through e-cigarettes, it's clear that vaping while pregnant should be avoided, but when it comes to your partner vaping in your company, things get tricky. According to the American Pregnancy Association (APA), e-cigarettes aren't regulated by the FDA, meaning it's difficult to know exactly what's being inhaled, and to what extent, when someone uses them. However, there's no actual smoke, eliminating the secondhand smoke scenario one would encounter with a typical tobacco cigarette. The question, therefor, lies in how many toxins are being released through the vapors. One of those chemicals is formaldehyde — a colorless, strong-smelling gas used in embalming fluid (among other things). The American Lung Association says "the aerosol (vapor) emitted by e-cigarettes and exhaled is full of formaldehyde" and that "little is known about these emissions or the potential harm they can cause."

When it comes to researching the long-term affects of vaping — first or secondhand— scientist still have a ways to go. Although laced with nicotine, e-cigarettes don't burn off tobacco like regular cigarettes,, so the risk of inhaling the toxins is somewhat lower, according to Tommys.org, a site dedicated to understanding and preventing miscarriage and stillbirth. But a lower risk doesn't necessarily mean there's no risk. A study published by the University of Southern California in Journal of Environmental Science echoes previous sentiments by other organizations, citing that e-cigarette vapors aren't as harmful as traditional cigarettes, but still release toxins into the air.

Constantinos Sioutas, professor at the USC Viterbi School of Engineering and corresponding author of the aforementioned study, notes that "overall electronic cigarettes seem to be less harmful than regular cigarettes, but their elevated content of toxic metals such as nickel and chromium do raise concerns." It's the toxins that are the most cause for concern and, again, little is known about the impact they have over time, or the affect they could have on unborn babies if the mother was exposed to vapors during pregnancy.

If your partner vapes as a replacement to smoking tobacco cigarettes, different doesn't equal better. While quitting is a challenging task that often fails, e-cigarettes are an OK plan B, says Newsweek, in reference to a new study in BMJ Journals. The research indicates that over a 10-year period, those who abandoned tobacco cigarettes in exchange for e-cigarettes didn't experience premature death. But again, the research still can't conclude the toxins — as opposed to just the hit of nicotine in either — are any safer in the longterm.

Because e-cigarettes are still fairly new, more research and regulation are needed in order to determine the safety implications. Until you know exactly what your partner is inhaling, most medical professionals would likely advise you to stay clear(or a safe distance while it's happening (read: not in an inclosed area). The risks are lower, but still, the risks exist. Your best bet is to talk to your doctor, and your partner, about your concerns.