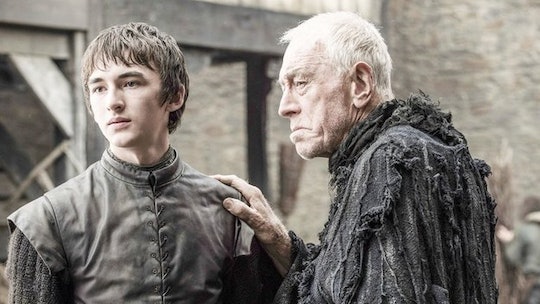 Can Ned Stark Hear Bran On 'Game Of Thrones'? Bran's Power Could Change Everything

It's clear Season 6 of Game of Thrones will be a game changer. Jon Snow has been born again, Tyrion has freed the dragons, and we've now seen the Tower of Joy. As the season continues more and more fan theories are coming out and some believe Bran may be a key player in whatever's going to happen next because of his ability to warg and visit the past. But is Bran able to actually communicate with Ned Stark on Game of Thrones?

In the third episode of Season 6 we saw Bran and the three-eyed raven at the Tower of Joy where a young Ned Stark and five of his men face off against two Targaryen kingsguards. Once the fight was over and Ned and his friend, Howland Reed, were the only ones left, Ned begins to head up to the Tower of Joy after hearing a woman, possibly his sister, Lyanna, scream. As Ned heads up the steps, Bran calls out to him, yelling, "Father!"

And Ned actually stops. He turns around but sees nothing and continues going up the stairs. When Bran asks the three-eyed raven if Ned heard him the three-eyed raven plays coy, as usual, and says Ned probably just heard the wind. If this was any other show, that might've sufficed as an answer, but this is Game of Thrones and anything is possible on this show.

Although Bran being able to talk to his young father sounds cool, in theory it could also be very problematic. Bran would surely want to warn his father about future events and try to stop his father from dying but if Back to the Future taught us anything, it's that messing with the past could ultimately wreck the future. Bran telling Ned too much could save Ned's life or it could lead to even more detrimental problems for the Stark family.

Some fans also worry that if Bran can talk to Ned, he could speak to anyone in the past. One Reddit user, NegativeKarmaSniifer, suggests that Bran caused the King Aerys, Danerys' father, to go mad. What if Bran visits Aerys in the past and attempts to talk to him, but Aerys can't see Bran or hear him clearly, causing Aerys to go mad? This theory may be a bit of a stretch but once again, anything's possible.

Other theories suggest the three-eyed raven is Bran in the future and he's trying to prevent Bran of the present from making his same mistakes, whatever those mistakes may be. With either theory, it's clear that Bran plays an integral role in the story, and his actions as he travels to the past could have dire consequences. Even though fans still haven't forgiven the three-eyed raven for taking Bran back before letting him go into the Tower, we have to hope that he'll prevent Bran from doing anything that will make things worse for the Starks. They've been through enough.