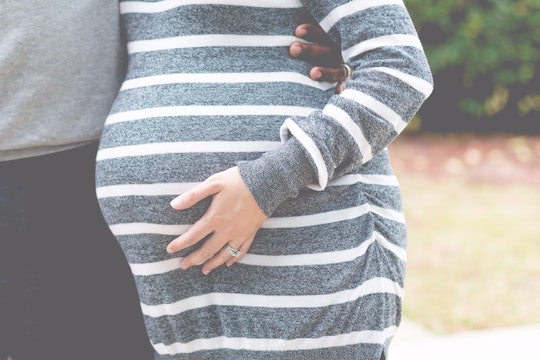 What You Need To Know About Norovirus & Pregnancy

Norovirus is not something that any person — let alone a pregnant woman — wants to come in contact with. Norovirus, or the stomach flu, can be ruthless and leave a path of destruction in its wake. Its impact is strong, leaving some people out of work or school for days. But can norovirus affect a pregnancy?

According to Today, norovirus is silent but not-so-deadly — and will affect those who are infected anywhere between 12 to 48 hours after catching it. Those who are sick with norovirus will feel it immediately, according to Today — and is most commonly associated with the symptoms of diarrhea and vomiting. According to People, the symptoms will typically last for one to three days — after which people tend to start feeling better. But when you're pregnant these symptoms can make the virus feel a lot more lasting than just a few days and can take a lot of energy out of a person. But aside from norovirus affecting the body normally, according to Pregnancy Magazine, studies have luckily shown that becoming sick with norovirus while pregnant has "no unique harms." And because of this, pregnant women should not have to really fear how it might affect their unborn child.

But what norovirus can do for pregnant women is lead to dehydration and loss of electrolytes, according to Pregnancy Magazine, which in itself could have a potential affect on pregnancy. Because norovirus is a virus, antibiotics can't help those infected. Instead, rest and drinking plenty of fluids is the best way to tackle the virus head on, according to the Centers for Disease Control and Prevention. Drinking fluids during pregnancy is important. According to the American Pregnancy Association, water is vital to almost every aspect of pregnancy — and when women are losing a lot of it due to norovirus symptoms, it could have a pretty big effect.

Dehydration during pregnancy, according to the American Pregnancy Association, could lead to complications such as low amniotic fluid and possible premature labor. This is understandably scary — especially for pregnant women who are unable to keep fluids and water down without throwing them up again. According to Men's Health, those experiencing this should wait a full hour after the symptoms subside to allow their stomachs to calm down before sipping something like a sports drink with electrolytes, slowly sipping more over the hour, to replenish their systems. And if that doesn't work, calling a doctor might not hurt. According to the CDC, severe dehydration may require hospitalization.

While norovirus might not have a huge effect on pregnancy, it can potentially cause discomfort and dehydration in pregnant women. Hydration is important for anyone sick with the stomach bug — especially those who are pregnant.