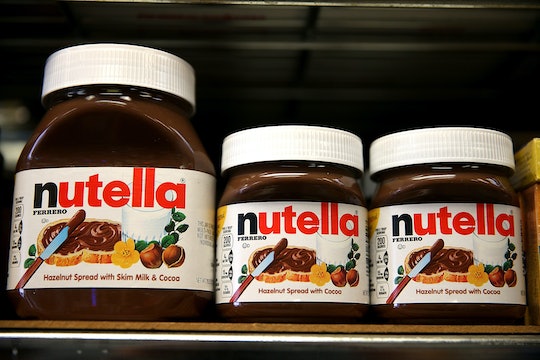 Hold Up: This Ingredient In Nutella May Be Unsafe

If you've ever eaten Nutella, you probably know it's packed with sugar and fat. You also probably don't care. That's because (in my very popular opinion) the chocolate hazelnut spread is an unparalleled slice of heaven, healthier options be damned. All that stops me from throwing a few jars into my cart each visit to the grocery store is that I know I could hardly resist downing a whole one in a single sitting, but I've never considered cutting it from my repertoire of treats entirely. Until, that is, claims emerged that Nutella (at least one ingredient) can allegedly cause cancer — sort of. After 90 seconds of intense soul-searching, I realized I'll probably indulge in some honey wheat braided pretzels submerged in globs of the stuff anyhow, as per personal custom.

The assessment of the European Food and Safety Authority that one of Nutella's principle ingredients, palm oil, could generate a carcinogen if heated at a high enough temperature is reason enough to take notice of the warning. But since the troubling news went public in May, the Italian company that makes Nutella, Ferrero, has been on both the defensive and the offensive seeking to reassure customers via television commercials that the palm oil in its products is safe and necessary to maintain its deliciousness too, Reuters reported. Ferrero has not yet responded to Romper's request for comment.

"Making Nutella without palm oil would produce an inferior substitute for the real product, it would be a step backward," Vincenzo Tapella, Ferrero's purchasing manager, told the outlet.

It's far from the first time that Nutella's makers have sought to convince both regulatory agencies and the sweets-loving public that its product is perhaps a tad healthier than it really is (though, you probably don't care if it's super-healthy either way, be honest). In fact, the company is currently lobbying the FDA to classify the product as something akin to a jam or jelly rather than its current categorization as a dessert topping. This would allow it to cut its serving size, and advertised sugar and calories counts, by half — and, the potential move's many opponents say, mislead shoppers into thinking it rivals peanut butter in health benefits, according to The Washington Post.

But the stakes involved in normalizing palm oil as a main ingredient are especially high for Ferrero, which relies on Nutella for about one-fifth of its sales. While other Italian companies have eliminated palm oil from their products — either as a matter of principle or marketing — Ferrero is hanging on tight. The company insists that it uses a heating method that ensures the oil is never hotter 392 degrees Fahrenheit that the EFSA deems potentially dangerous. And that's clearly a matter of economics, at least in part: It may very well be true that using another type of oil could compromise Nutella's irresistible velvety texture, but it also has the potential to cost Ferrero an additional $8-22 million each year, according to a calculation by Reuters.

For those who are now weary but still nursing an unshakeable sweet tooth, the good news is this: The European Food and Safety Authority has not gone as far as to recommend that people stop eating Nutella. The FDA, which unlike the EFSA has the power to ban the ingredient, has not done so in the United States, either. Considering the politics and economics involved in shuttering an entire nation or bloc of nations to a $44 billion industry, that may be of small comfort. Unfortunately for some, feeling bummed about these tough new developments brings us back to a hankering for a favorite comfort food: Nutella.