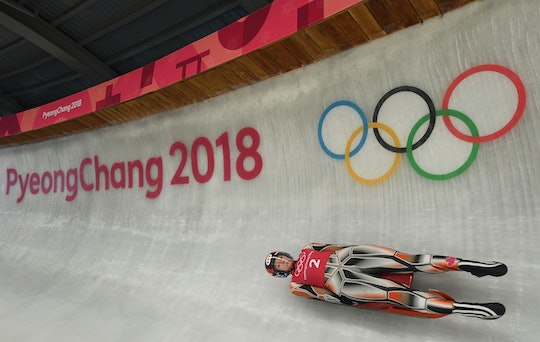 Here's What Happens When Athletes Get Sick At The Olympics

As if the South Korean Olympic Committee didn’t have enough to worry about — with North Korea scheduling a huge military parade the day before the opening ceremony, and winter temperatures plunging — they’re now contending with a serious norovirus outbreak, and just a couple weeks ago there were multiple reports of a flu outbreak in South Korea as well. With athletes already on the ground in PyeongChang, many are wondering what will happen if they start succumbing to the horrific stomach bug or influenza — can Olympic athletes compete if they’re sick?

Approximately 1,200 security guards have been waylaid by the highly contagious norovirus, and 41 have been hospitalized because of it, reported Time. Last winter I had the norovirus and for the sake of all Olympic athletes (and spectators), I hope they contain this thing — and quick. The norovirus, also known as the "winter vomiting bug" is the flu on steroids. I'm talking hard-to-keep-saltines-down, sleep-on-the-bathroom-floor awful. Having the norovirus taught me firsthand what "shuking" is. Not pretty.

What's more, the norovirus has an abrupt onset (I can attest from personal experience that "abrupt" is an understatement), and can last anywhere between one and three days, according to WebMD. You can get it by consuming contaminated foods or drinks, or by coming in contact with a surface infected with it. It’s kind of like food poisoning that you can also get by touching a door knob — ye gods!

So how is the Olympic Committee dealing with the outbreak? The 1,200 infected security guards have been isolated and replaced with 900 military soldiers, according to CNN. Reuters reported that workers are disinfecting all Olympic accommodations and buses, and hand sanitizer stations are being installed throughout the grounds.

In a statement Monday, the Korean Center for Disease Control and Prevention (KCDC) said they had "dispatched an immediate response team to the PyeongChang site to check additional people for symptoms, check the origin of the exposure, take measures to control infection and prevent spread."

Athletes train almost their entire lives for a chance at Olympic Gold so what happens if illness strikes at the most inopportune time? The 2017 International Association of Athletics Federations (IAAF) World Championships, held this past summer in London, present the best example of what we can expect if athletes start getting hit with the norovirus at the 2018 Olympics. At least 30 athletes and team mates were hit with the norovirus in London and several top athletes were forced to drop out, reported The Guardian — dashing their hopes of taking home a medal.

The timing of the norovirus outbreak was so horrible that conspiracy theories even started to crop up. One athlete named Isaac Makwala, a Botswatan 200-meter sprinter, was forced by the IAAF to withdraw from competition due to his illness, effectively favoring his top competitor. But Makwala, who claimed he was never tested for the virus and maintained that he was fit to compete, told the BBC, "The way they [handled my situation], there’s something they don’t want to tell us... There’s something fishy.”

The norovirus is most definitely foul but fortunately no one is making claims of foul play in PyeongChang. Hopefully some lessons were learned from the 2017 World Championships. A statement from the IAFF, in response to the norovirus outbreak in London, said that they had issued "standard procedure for such an occurrence where a number of teams are occupying championship accommodation.”

Each nation's sport team usually has at least one doctor, or at least one general physician per country represented at the Olympic Games, according to Today. There is also a centralized clinic in the Olympic Village, shared former Olympic swimmer Bryan Kim. Though for contagious illnesses, an athlete would most likely be treated in isolation, as American bobsledder Lolo Jones who fell ill during the 2014 Winter Olympics in Sochi, Russia.

I'll be keeping my (hand-sanitized) fingers crossed that all of the athletes stay healthy and norovirus-free.