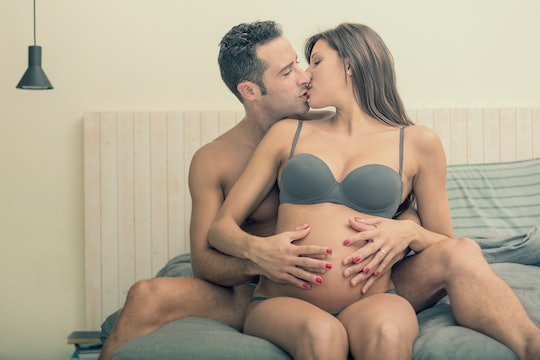 What Experts Want You To Know About Orgasms & Premature Labor

When you're pregnant, it's easy to feel as though your favorite things are "off limits." From people telling you to avoid sushi, or that you can't have a simple, small glass of wine, it can be difficult to navigate the stresses of pregnancy without at least some sort of reprieve. Thankfully, and usually, orgasms are still on the table. But can an orgasm cause premature labor? While sex is, for the most part and barring complications, safe when you're pregnant, there are a few things to consider before you get it on.

Most people are aware that sex can, sometimes, start the process of labor. A study in the journal Birth found that more than 50 percent of pregnant women attempted to induce the birth of their baby, and 22.9 percent of those women chose to have sex as a way to induce labor "naturally." According to the National Women's Health Resource Center, and for most women with low-risk pregnancies, sex during pregnancy is not harmful and doesn't present any risk factors to the mother or the baby. "Unless you're bleeding or have an infection, sexual activity is OK and won't hurt the baby." So while it might feel somewhat awkward at first, and as your pregnancy progresses, sex during pregnancy is usually safe.

The National Women's Health Resource Center goes on to explain that some women experience an increase in their libido when they're pregnant, citing body changes and an influx of hormones as to why some pregnant women are all about sex while they're simultaneously growing another human being inside their body. Other women experience the opposite, and the same center says "the combination of nausea, fatigue, anxiety, and hormone fluctuations make sex seem like the last thing you want to do."

But does having sex and experiencing an orgasm, in particular, cause premature birth? Although the physical experience of having an orgasm, and the prostaglandins in semen, can cause uterine contractions, these do not usually lead to labor. The Mayo Clinic says that if you're at risk of premature labor, your doctor may advise you to abstain from sexual activity, but this is likely just a precaution and not a link between the two. The Mayo Clinic goes on to explain, saying, "Most studies haven't shown that sex during pregnancy is associated with an increased risk of preterm labor or premature birth."

The Mayo clinic also goes on to dispute the myth that sex can induce birth as the weeks tick by and as you enter that dreaded "over due" territory, saying, "Sex isn't likely to trigger labor, even as your due date approaches."

There are some times when sex and pregnancy shouldn't mix, though. Baby Center says if you have any of the following symptoms, it's best to avoid sex until you can speak with your doctor:

Rest assured, however, that unless you have been advised not to, having sex will not cause premature birth. So enjoy those orgasms, moms-to-be. You absolutely deserve them.

More Like This
OB-GYNs Explain The Connection Between Stress & Miscarriage
Fun, Sexy Maternity Lingerie, For When The Mood Strikes
Dealing With Postpartum Back Pain? Physical Therapists Share Their Tips
Why Your Vagina May Be Itchy After Sex & What To Do About It
What Parents Are Talking About — Delivered Straight To Your Inbox