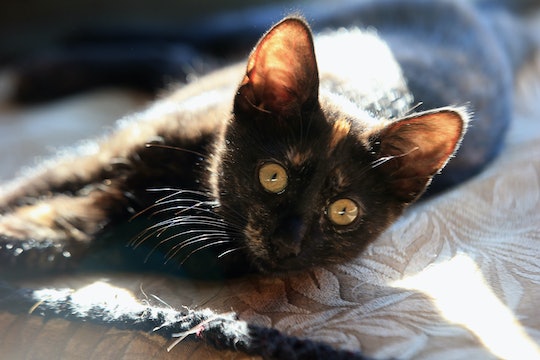 Here's How Owning A Pet Can Impact Your Period

Our pets are considered part of the family, and are more than capable of changing my mood, my stress levels, and even my health. In fact, research has long-documented the health benefits of having a pet, like increased exercise, weight loss, and a general sense of wellbeing. But can your pet change your period? After all, those furry creatures are pretty powerful and can heavily influence almost every aspect of our lives. Turns out, the answer is a resounding... maybe.

The link between your pet and your period hinges on your pet's ability to change the hormone levels in your body. It's an age-old belief that women and other people with uteruses who live together will "sync up," or start to menstruate at the same time. But, according to Scientific American, research has largely been unable to document this actually happening. Since most other mammals do not menstruate, according to the BBC, it's definitely not going to happen with our furry roommates, either.

A study in the journal Physiology & Behavior revealed that having a dog can impact your hormone levels, though, like cortisol and oxytocin. As a result, a dog's levels of the same hormones will raise or lower to match their owners. Another study, as reported by Psych Central, showed that snuggling with your pet can increase your levels of happy hormones like dopamine and serotonin, too, so while they can't stop you from getting period they might be able to change the way you feel about it.

That doesn't mean that other physiological processes aren't impacted by pet ownership, though. A study published in the journal Physiology & Behavior showed that dogs and humans start to experience similar hormone levels over time. This means your dog's hormones related to stress and love — cortisol and oxytocin — will fluctuate to match their owners. Spending time with your pet can increase your own levels of oxytocin, too, which is the so-called "love hormone." As Good Housekeeping reports, oxytocin is a natural pain reliever, so spending time with your pet might just relieve your period pain, too.

Likewise, having a pet can lower levels of the stress hormone, cortisol. According to the Society for Endocrinology, high levels of cortisol can impact your period, causing it to become irregular or even stopping entirely. This means that, theoretically, if pet ownership can reduce stress in your life — and consequently lower your cortisol levels — it could possibly also impact your monthly cycle. Again, it's less about "synching up" and more about how your pet's impact on hour hormones ends up impacting your period.

As Broadly reports, some animals can sense when you are menstruating, either by smell alone or by sensing changes in you, and that sense might alter their behavior. This might be the reason why some pet owners report that their dogs seem to want to sniff their crotch and their cats want to snuggle when they have they're on their period.

As NBC News Reports, one study has actually documented that cats bond with female owners and will show them love and affection when they need it or are feeling blue. So it's natural to wonder if they might show you just a little bit more love during your monthly visit from Aunt Flow, especially when you want to snuggle with a furry, purring heating pad.

Pets can also have a dramatic impact on your mood. As Psych Central reports, research links having a pet with a general sense of chill or wellbeing. Physically touching your pet can actually increase your levels of serotonin and dopamine. You may not be surprised to learn that these same hormones also change during your monthly cycle, which is why your mood is often impacted by menstruation.

As Scientific American reports, decreased estrogen during your period can result in poor impulse control, which might be the source of the stereotype of women on their period eating everything in sight. The hormone dopamine plays a big role in this process, too, so having a pet just might give us a bit more self-control during our cycle.

Likewise, PMS can cause serotonin levels to fall, according to Fairview.org, which can result in you feeling sad. Since hanging out with your pet can increase these hormones associated with pleasure and motivation, it could change the way your brain reacts to your monthly cycle.

So, while there's no definitive scientific research connecting pet ownership with your period, it's certainly possible that a connection exists.

More Like This
Can You Mix Breast Milk & Formula? Experts Weigh In
Can Elderberry Help Prevent Illness In Kids? Doctors Weigh In
Endometriosis & Your Sex Life
What Is RSV?