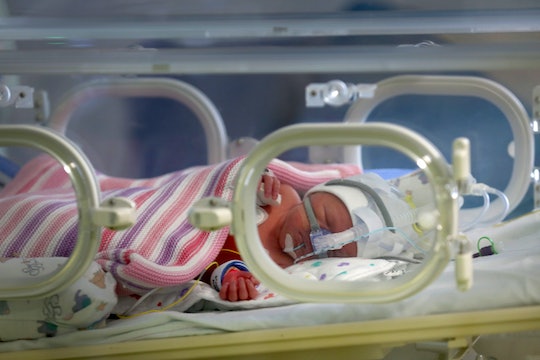 Can Premature Babies Breastfeed? The Short Answer Is Yes, But It's Complicated

Your due date is circled on the calendar and your newborn photoshoot is booked. You're putting the final touches on the nursery, and dreaming about what the first days of parenthood will look like. When you have your baby prematurely, these things are thrown into complete disarray, and you're left wondering if anything will go according to plan. Some of the things you were banking on are suddenly up in the air, and you're left asking simple questions like, can premature babies breastfeed? Because welcoming a baby prematurely can often come with special challenges and accommodations, it's common to wonder if breastfeeding is off the table.

While there are added difficulties that come along with breastfeeding a premature baby, the benefits of it are plentiful. In one 2012 study published in the journal Pediatric Clinics of North America, researcher Mark Underwood found that "Human milk from women delivering prematurely has more protein and higher levels of many bioactive molecules compared to milk from women delivering at term." Breast milk not only improves growth and neurodevelopment, it has been shown to decrease the risk of necrotizing enterocolitis and late-onset sepsis. However, Underwood explains that this breast milk "does not alone provide optimal nutrition" and must be fortified to meet the special needs of your premature baby.

As NICU mamas know well, your family's circumstances can vary drastically depending on just how premature your baby arrived. "Until about 32 weeks, babies can’t coordinate sucking, swallowing, and breathing well enough to breast or ​bottle feed," explained Very Well Family, "and babies less than about 37 weeks aren’t strong enough to take enough nutrition by mouth to gain weight." Though nursing may not be an option for certain preemie moms, your breastfeeding goals certainly don't need to be ditched. Through pumping, you can supply your baby with breastmilk in the interim.

Of course, the pains of having a baby early can cause pumping to get off to a rocky start. It's important for preemie mothers to know they're not alone, and this difficult adjustment period is actually incredibly normal. "The extra stress, discomfort, and fatigue that come with the birth of a preemie can cause a slow start with milk production, but this slow start usually gives way to an adequate milk supply by the fifth or sixth day after birth," according to the website of breast pump manufacturer Medela. The site encourages new moms to pump eight to ten times daily during the first two weeks to stimulate prolactin, the hormone that tells your body to produce more milk. Your breastmilk can be given to your baby in the NICU, and you can begin accumulating a supply at home, too. Working with a certified lactation consultant can help you increase and maintain your supply or address any other issues that may arise.

For many moms, however, breastfeeding is simply not feasible, despite best efforts and professional help. After developing sudden onset preeclampsia, followed by a diagnosis of HELLP Syndrome just 24 hours later, Charlotte Fraser Smith delivered her baby Alice at only 28 weeks and four days. For Smith, who had intentions to breastfeed, discovering she couldn't was a major letdown in the midst of an already frightening time. "I did try to pump. They actually had me pumping while having Alice on me to try to stimulate anything," Smith recalls to Romper. "When we thought she’d be born on time, I was going to pump colostrum until my milk came in — and not even my colostrum came in."

Still motivated to give tiny Alice the benefits of breastmilk, Smith signed her up to receive sterilized donor milk from the hospital's milk bank. "It was a massive relief," Smith tells Romper. "It was a weight lifted to know my baby was getting nutrition she could digest." Alice's neonatal team continued to give her donor milk until 34 weeks, when they felt she was out of the woods.

When a baby is born prematurely, their first days, weeks, and even months of life can bring challenges and obstacles you never fathomed. For many moms, supplying their preemie with breastmilk offers them a way to feel proactive and in control in a time that feels very much out of their control. While every NICU mama has different stories, different abilities, and different available options, one thing can be said about all of you: You're incredibly strong, and your little fighter is lucky to have you.