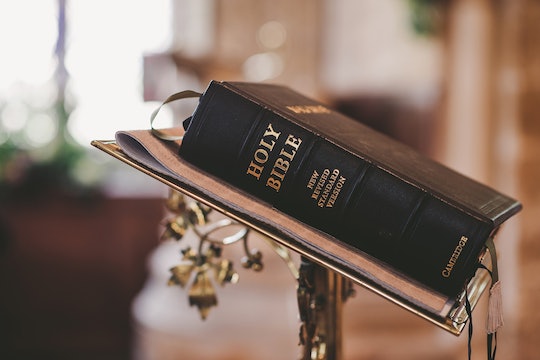 Is It Legal For Public Schools To Teach The Bible?

One of the founding principles of the United States is the idea that church and state should always be separate. It often gets muddled, whether it's Christmas decorations in front of a city building or the fact that politicians often lobby to keep things like religious statues on government property. But when it comes to education, thanks to Supreme Court cases like the 1948 McCollum v. Board of Education, it's pretty clear where that line has been drawn, and that public schools cannot teach the Bible to students. Regardless, one West Virginia school has been holding an elective Bible study program during the school day, and although it's popular with students, one family is suing the district, with the help of the Freedom From Religion Foundation.

The Bible in the Schools program is taught weekly in Mercer County schools in West Virginia, and it has been in place for over 40 years. It's not mandatory, but pretty much everyone, around 4,00 students, attends the course. Community members and parents raise money every year — last year they raised $500,000 — to keep the program going. The program alleges that it's teaching the Bible as history and literature.

However, one of the plaintiffs in the suit, Elizabeth Deal, alleges that her daughter wasn't offered an alternative elective during the course and was told to read a book in the computer lab by herself for the duration of the Bible class. Because she was separated from her classmates, Deal's daughter was reportedly bullied and eventually moved out of the school district, where she was no longer bullied.

In order to win the suit, the school district would have to prove that there is a secular reason to hold the Bible study program. But it doesn't seem like community members or parents are under any illusion that the program is secular — in fact, they seem to like that it's teaching children their faith.

One mother, Cherilyn Thomas, told CBS News, "It is very important that what we teach at home can be moved on to the school and instilled there and moved to the church and it’s still there so that it moves in a circle," she said, betraying the school's position that the program isn't about teaching a form of Christianity.

The suit alleges that the program promotes just one kind of religion and also teaches that events in the Bible are historical fact. One lesson teaches that Adam and Eve lived at the same time as the dinosaurs.

Here are some sample lines from the program, according to suit:

If all of the Israelites had chosen to follow the Ten Commandments, think of how safe and happy they would have been.

So picture Adam being able to crawl up on the back of a dinosaur! He and Eve could have their own personal water slide! Wouldn’t that be so wild!

Rev. Ray Hurt, the lead pastor in the area, told The Washington Post that there are valuable lessons to be learned from the Bible. Even history. He said:

... From what I’ve read almost every piece of history that’s in the Bible has eventually been proven. We see the Bible not just as a book of faith but as a pretty accurate account of history that informs us about a lot of things that happened.

It might be just that attitude that worries agnostic or atheist parents, or parents raising children in other religions. The FFRF and the plaintiffs are asking that the program be completely removed from the school day and curriculum. Given the historical inaccuracies in the program — humans didn't live with dinosaurs — and the fact that there's no other secular, educational alternative for students who don't take the class, the program might be in trouble as the suit goes to court.