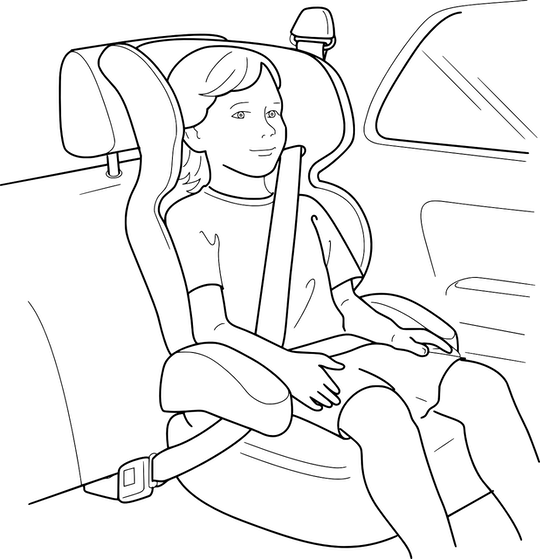 Can Seat Belts Injure Kids? One Mother Says Her 6-Year-Old Should Have Been In A Booster

Sometimes, it seems as though there's nothing children want more than to grow up: They want to learn to ride bicycles without training wheels; They beg for later bedtimes. And when it comes to travel, so many think they're ready to ditch the carseats and booster seats. But the mother of one 6-year-old who was severely injured in a car crash recently wants other parents to know that allowing them to do so may not be the safest move, and that regular seat belts can injure kids if families make the transition too soon. In order to keep kids safe in the car, it's imperative that they're adequately and appropriately restrained depending on their height and weight — no matter how much these precocious sons and daughters pine to join the ranks of the "big kids."

If Shelly Martin of Richmond, Virginia, didn't know the ins and outs of this crucial point before, she certainly does now. In mid-September, her daughter, Samantha Swartwout, sustained a concussion, a deep abdominal cut, and ended up with stitches in her forehead after her father's car veered off the road and slammed into a tree, CBS News reported. The girl was buckled in, but the seatbelt actually caused the cut to her belly that exposed her intestines, because of the speed of the impact.

"Her intestines were out on scene on the left side," Martin told CBS, adding soon after:

She would not have been this hurt in a booster. Don’t think that just because your child is 7 or 8 years that they are too big... they aren’t!

In fact, different states have different requirements when it comes to kids' safety in cars, although only two (Florida and South Dakota) lack laws that mandate kids who have outgrown child safety seats but aren't quite big enough to safely wear an adult seatbelt, according to the Governors Highway Safety Administration. But according to the Department of Motor Vehicles in Virginia, where 6-year-old Samantha spent three weeks in the hospital after the wreck, kids shouldn't graduate from booster seats until they are at least 8 years old and four feet, nine inches tall. They should travel in rear-facing carseats until they're 2, and need to weigh at least 20 pounds before moving on to forward-facing seats.

After the booster seat, here's the criteria for safely riding with an adult seatbelt: Kids need to be able to sit comfortably (without slouching) with backs against the seat back and knees bent over the edge of the seat and feet flat on the floor. The shoulder belt should fall across the center of the chest and center of the shoulder, and the lap belt should be snug across the upper thighs.

Martin believes that if her child had been in a booster seat, as she could have been, her injuries would not have been nearly as grievous. Likewise, mom Autumn Alexander Skeen is sure that her son, Anton Skeen, would still be alive if she'd known to properly restrain him before the 1996 car accident that ultimately killed the 4-year-old. According to People, Anton was strapped in to the adult seatbelt in the front seat of the car when it rolled over three times, ejecting the 45-pound boy and crushing him. His mother subsequently advocated for the first booster seat legislation in the nation, which was enacted in Washington in 2001. It mandated that kids between 4 and 6 years old and between 40 and 60 pounds be belted into a booster seat.

Since then, many other states have followed suit and passed similar laws. Parents and guardians must follow them, as well as do their own research about how to make their kids as safe as possible while traveling.