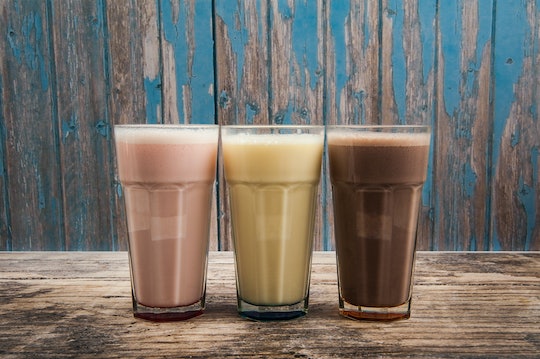 Can Shakeology Replace A Prenatal Vitamin? Experts Weigh In

I hated taking prenatal vitamins. I even bought the chewy version that were supposed to taste like gummy bears and they tasted like fish and regret. I'd love to be able to drink a chocolate shake instead, like the Shakeology my friends are filling my Facebook feed with, but can Shakeology replace a prenatal vitamin like many claim? It's supposed to be a "superfoods" shake, but how beneficial can it be?

Shakeology is the nutrition shake made and endorsed by multi-level marketing company, Beachbody — you've probably seen them on Instagram or Facebook. I know I have several friends who sell their programs and their shakes, which are known for being tasty and fast nutrition that's developed to complement the rigorous workout routines on their streaming service.

Recently, women have been reporting that they've been taking Shakeology in place of their prenatal vitamins, or along with a folic acid supplement. It seems like a dream, right? A milkshake a day instead of pills that make you burp up something that smells like the waste bin of the local fish and chips shop. Albeit a very expensive dream. My prenatal vitamins were only $10 per month, whereas Shakeology is a whopping $130 for 30 servings. That's $10 per day in shakes that aren't even approved by the Food and Drug Administration (FDA).

Can Shakeology replace a prenatal vitamin if it's not regulated by the FDA? In a word — no. And it's not just because it's not FDA approved. First of all, even the proprietors of the company aren't endorsing this tactic by its MLMs. On their website, Beachbody noted that it should not be used during pregnancy or breastfeeding unless under the supervision of a doctor. Why is that?

I spoke with registered dietitian Katie Heddleston, MS RD, who specializes in moms and kids, and she tells Romper, "The very first thing I looked for when aiming to answer this question was the level of folic acid or Folate in the product. Shakeology contains 200 micrograms of folic acid, which is much lower than the 600 to 800 micrograms recommended during pregnancy." She notes, specifically, that many women require folate — not traditional folic acid — during pregnancy because it's easier for the women to synthesize.

But Shakeology is lacking another key nutrient, according to Heddleston, and that's iron. "Many prenatal vitamins also contain 100 percent of iron, due to pregnancy-related anemia being a common condition, and this shake sits far below that level," she says.

And Shakeology isn't just a protein shake that contains powdered whey and sugar — it's a meal replacement supplement drink that is full of different herbs and minerals, some which are contraindicated for pregnancy and breastfeeding. "Some of the herbs used in their proprietary super-fruit blend don't have enough data deeming them safe for use during pregnancy, such as ginkgo, goji, and astragalus," Heddleston says. Yes, they're in minute amounts, but they're being combined and you're drinking them every day. Not only that, but the shake only contains 50 percent of the daily recommendation of folic acid, so many mothers might also take an additional prenatal vitamin, which can lead to vitamin toxicity.

We didn't even get to the calories and sugars or sugar alcohols used in the popular shake. Doctor Yen Tran, OB-GYN at Orange Coast Memorial Medical Center, Fountain Valley, California, tells Romper that "during pregnancy, some patients might develop gestational diabetes with extra intake of glucose from the shake, and it might predispose patients to having diabetes. Having diabetes involves the patient testing for glucose levels several times a day, limiting calories intake, and having to take hypoglycemic medications or insulin. I would advise my patients to stick with the traditional prenatal vitamins."

Talk to your OB-GYN if you are considering taking Shakeology during your pregnancy, and weigh the risks and benefits carefully before deciding whether or not to continue your shake regimen. Who knows, maybe an OB-GYN will come up with their own prenatal shake that we can all chug.