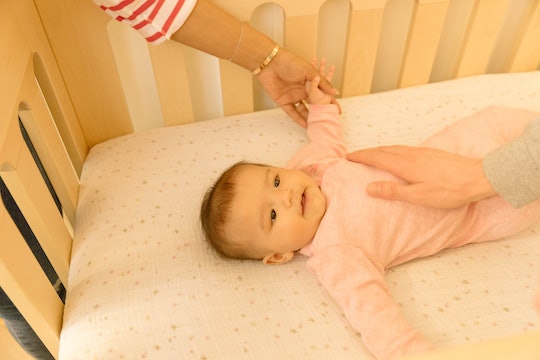 How Often SIDS Happen In A Crib, According To Research

Sudden Infant Death Syndrome (SIDS) is a looming fear nearly all new parents have. Even when taking all the safety precautions, the fear is a valid one, as the exact cause for SIDS remains unknown. So when a parent is planning their soon-to-be newborn's nursery, it's common to worry about safety rather than aesthetics. So, can SIDS happen in a crib? As a new parent who will have more than enough on your already extremely full plate, you deserve to know all the risks before planning your family's sleeping arrangements.

According to The Baby Center, approximately 1,600 infants die in the United States from SIDS each year. According to The Mayo Clinic, the cause of SIDS is unknown, but it "appears that SIDS may be associated with abnormalities in the portion of an infant's brain that controls breathing and arousal from sleep." The pseudonym for SIDS is "crib death," which can confuse and frustrate well-meaning parents who do everything necessary to prevent the risk of SIDS. The truth of the matter is, the phrase "crib death" is misleading, as SIDS can occur in sleep spaces outside the crib. In fact, a 2013 pediatric study published by BMJ Journals reported that bed-sharing may increase the risk of SIDS by up to five times, even if the parents were non-smokers and the mother did not use illegal drugs or drink alcohol prior to going to bed.

The American Academy of Pediatrics recommends, as part of their Safe Sleep campaign, that all babies lay on their backs. They've also stated not to place babies to sleep in car seats or infant swings. In terms of using a crib, the National Institute of Child Health and Development suggests only using a safety-approved crib. This means a "crib, bassinet, or portable crib that follows the safety standards of the Consumer Products Safety Commission." A lot of cribs haven't met basic safety standards, so it's best to check online before purchasing a crib for your infant and/or child.

Other SIDS risk factors, that may have nothing to do with where or how baby sleeps include, low birth weight, preterm delivery, smoking during pregnancy, and other various health-related concerns. A registry put out by the Center for Disease Control and Prevention (CDC), however, may have the answers parents are looking for when trying to create the safest sleeping environment for their baby. In fact, the registry aims to educate similar safe sleep practices in an aid to possibly prevent SIDS.

While the message is clear that, yes, SIDS can happen in a crib, it's less likely to occur if you're following all the detailed protocols set out by sleep experts, and creating a safe environment for your baby sans blankets, pillows, lovies, stuffed animals, or any other unnecessary add-ons that could pose as potential suffocation hazards.

When in doubt, the purchase of a specialized monitor (a monitor that tracks baby's every movement) may ease your mind, although it should be noted that those monitors can be pricey and are not considered affordable by all. In the end, the best you can do is stay informed, keep your baby's crib bare, and try to get some rest yourself.