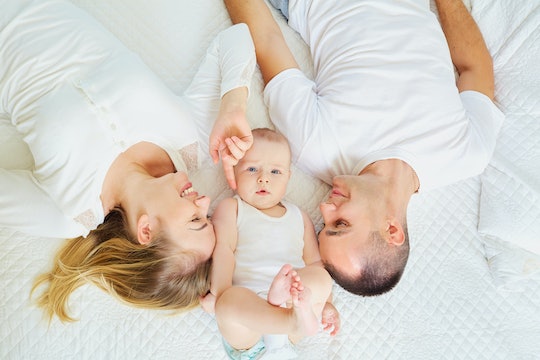 The Connection Between SIDS & Bed-Sharing

Despite the rise of the bed-sharing movement, the threat of SIDS looms over many parents considering the sleep method. They wonder can SIDS occur when you bed-share and is there any way to do it safely? The answer really depends on who you ask.

According to the American Academy of Pediatrics' (AAP) new guidelines released last year, babies should sleep on a separate surface than their parents until they're at least six months old. The organization noted that that approximately 3,500 sleep-related infant deaths occur in the US each year, and in order to decrease this statistic, ensuring a safe sleep environment is vital.

However, according to NY Mag, bed-sharing is on the rise despite the "official" recommendations. The article stated that an estimated 60 percent of parents sleep with their baby in their bed at some point during their first year, despite official advice. In fact, the AAP adjusted its guidelines to discuss the fact that many parents will bed-share (although they never recommend it exclusively):

However, the AAP acknowledges that parents frequently fall asleep while feeding the infant. Evidence suggests that it is less hazardous to fall asleep with the infant in the adult bed than on a sofa or armchair, should the parent fall asleep.

For exhausted mothers, waking every two to three hours to feed their babies, having to walk into another room, be awake for at least 30 minutes each feeding, and then settle back to sleep until the next feeding, convenience plays a huge role in the decision to co-sleep. Furthermore, there are other benefits of bed-sharing that affect parent's decision to co-sleep. Dr. Sears listed possible benefits like improved sleep quality for both mother and baby, long term emotional health, physiological benefits and more.

Despite the many people who decide to bed-sharing, there can be a risk involved, if parents aren't careful to guarantee a sleep safe environment.

The AAP noted that in the majority of sleep-related deaths, the babies were found with a blanket over their face or head, or slipped down in between the bed frame and mattress. As horrific as these co-sleeping scenarios are, the likelihood of SIDS increases with an unsafe sleep environment.

If you, like the majority of parents, decide to co-sleep at some point, make sure you're doing it safely. Dr. James McKenna, one of the leading experts on co-sleeping and founder of the Mother Baby Behavioral Sleep Laboratory at the University of Notre Dame suggests parents take the following precautions to drastically reduce the risk of SIDS:

Although the threat of SIDS is terrifying to think about, there are many advocates for co-sleeping that suggest that the method can be even safer than co-sleeping when practiced safely.