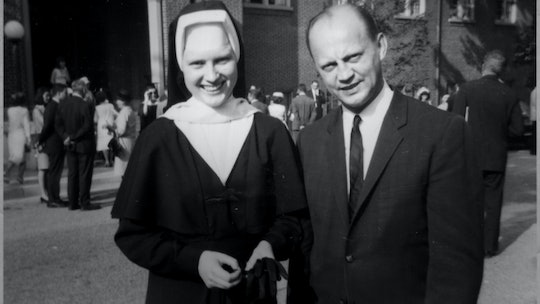 Though the murder of Sister Cathy Cesnik occurred in 1969, it's still unsolved to this day. There have been suspects over the years, but no one was ever convicted of the crime. Now that Netflix's The Keepers will bring more attention to the case, many may be wondering if it could result in a decades-late resolution. After Robert Durst's surprising confession was caught during the filming of The Jinx, it seems possible for the truth to be uncovered in any revisited case. But can Sister Cathy Cesnik's case still go to court?

That would be unlikely for many reasons, chief amongst them being that the case went cold decades ago, making the majority of suspects either very old or dead. One figure in the series, Father Joseph Maskell, was allegedly sexually abusing many of the students at Archbishop Keough High School, where he served as chaplain and Cesnik taught English and drama. (Maskell denied initial accusations until his death in 2001.) Girls who had allegedly been abused by Maskell confessed to Cesnik, who reportedly wanted to do her part to put a stop to it before she promptly disappeared.

The abuse was not made public until 1994, when two former Keough students, Jean Wehner and Teresa Lancaster, brought a lawsuit against Maskell. Over 30 men and woman testified, according to Inside Baltimore, and Wehner claimed that Maskell had shown her Cesnik's dead body in 1969 as a warning to keep her from talking about her abuse. Unfortunately, the case was thrown out in 1995 due to statute of limitations.

Sexual abuse victims in Maryland only have three years from the time the abuse ends or when they find out about it to file a civil lawsuit. Wehner and Lancaster had repressed what allegedly happened to them and only began to remember it years later; their lawyers argued that they were within the three-year window because the abuse had so recently resurfaced in their memories. The judge disagreed. Though just last year the Archdiocese of Baltimore settled with at least 12 people who were abused by Maskell, he never saw jail time for either the abuse or the murder. He was merely removed from priestly duties before relocating to Ireland.

Assuming that the case remains unsolved because the perpetrator was never suspected, there is a chance that the case could go to court if a thoughtful case is brought forward. There is no statute of limitations on murder, leaving some hope that there could be justice for Cathy Cesnik someday.