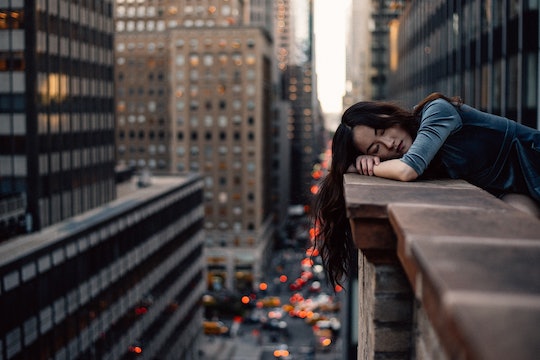 Your Exhaustion Can Literally Make You Sick

I often wonder if being a mom is just accepting exhaustion for 18 years. Why isn't coffee a thing people put on their baby registry? It was as necessary to me as a bassinet or baby wipes, especially since moms get no sick days. But, can sleep deprivation make you sick? Do all of those late nights, early mornings, and "what time is it?" moments do something to your immune system? (Unrelated, I think there should be a wine registry for new moms, too.)

I know that there are days when I feel accomplished because I managed to put on pants. With sleepiness of that level, the last thing you want to do is get sick, because the only thing worse than tired? Tired and sick. When you're sick, it feels like taking care of your children becomes an almost insurmountable task — but no sick days. It seems especially true in the throes of new motherhood. Something as simple as a cold seems to weigh down every limb, making those 3 a.m. feedings feel like you need to jump through a hoop of fire before climbing to Mordor, just to get to the crib. Worse yet, it seems as though the more tired you become, the more often you get sick. That 4 month sleep regression? Call it "the great strep throat of 2016." Teething? Ahh, yes, I remember it well. It was that lovely eczema outbreak all over the back of my thighs. Fun times.

If you see a correlation, too, you're not wrong. Sleep deprivation can make you sick, according to The Journal of the American Medical Association (JAMA).

It can be more than that, though. Sleep deprivation has been shown to slow the healing process when you're in active infection, according to The Journal of Intensive Care Medicine. The article noted that sleep deprivation is not only a factor in prolonging the illness, it also has a psychological component to compound the issue. You can't sleep, so your body doesn't heal. That can make you depressed, and depression can lead to insomnia, and then you're back where you started.

If that's not bad enough, sleep deprivation can intensify the symptoms of postpartum depression. This is what is called a "bidirectional additive," meaning that one symptom makes the other worse in a cyclic pattern from the depths of Hades, according to a study in Current Opinion in Psychiatry. (Hades being my own emphasis.) Mothers with postpartum depression and sleep deprivation may suffer with difficulties bonding to their babies and taking care of their children and themselves, according to the study.

Can sleep deprivation make you sick? Survey says yes. And all of those "sleep hygiene" routines touted by sleep experts like those at the Centers for Disease Control and Prevention (CDC)? It doesn't seem feasible to do things like going to bed at the same time every night (hello, you're a parent) or removing gadgets from your room (hello, baby monitor). But getting sleep is important, even if it feels impossible. Heck, even if it is impossible. If you have a partner you can lean on, do it. If you have someone who can watch your little one for a few hours, do it. Remember, the flight attendant tells you to put the mask on yourself first for a reason.