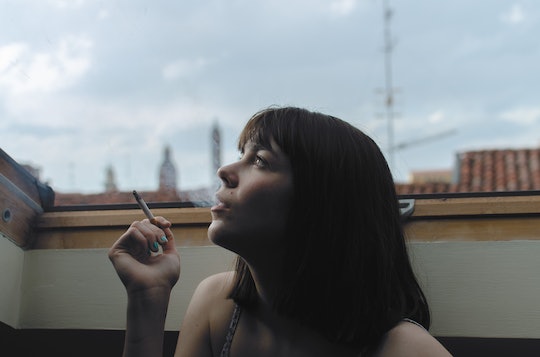 Can Smoking Cigarettes Before You Know You're Pregnant Cause A Miscarriage? Here's What We Know

It’s often said that life is full of surprises, and finding out that you’re unexpectedly pregnant can be the biggest surprise of all. An unplanned pregnancy can stir up a range of emotions, including fear, especially if you have been drinking or smoking. With concerns that you may have done harm to your baby or pregnancy, it's important to know, can smoking cigarettes before you know you're pregnant cause a miscarriage?

According to What To Expect, you shouldn’t worry too much about the smoking you did early in your pregnancy, but you should quit as soon as you find out. The article explained that women who quit smoking before week 15 of their pregnancy had lower chances of harming their baby. You should make sure to let your doctor know if you have been smoking, however, because smoking during the time you conceive can increase chances of an ectopic pregnancy and premature delivery.

The combination of nicotine and carbon dioxide in cigarettes can reduce the amount of oxygen your baby gets, explained Baby Center, but the sooner you quit smoking, the sooner your baby will get the oxygen to grow and develop properly. The lack of oxygen combined with the effects of the other 4,000 harmful chemicals found in cigarettes can affect the development of your baby's brain, heart, lungs, and size noted the American Pregnancy Association, because when you smoke, it's like your baby is smoking.

The sooner you quit, the better. A 2009 study published in the journal Obstetrics and Gynecology found that pregnant mothers who quit smoking in the first trimester increase their chances of delivering a healthy full-term baby. The study showed that the later a mother quits smoking, the more her risks for miscarriage rise.

It’s important to remember that all women, their babies, and their pregnancies will be different. There is usually no one-size-fits-all prognosis, but there are things that are known to increase health risks, smoking being one of them. If you need help quitting, reach out to your doctor for support and methods that can make the transition a little easier. While smoking in early pregnancy doesn't necessarily mean you’ll have a miscarriage, it's a good idea to quit as soon as you can.