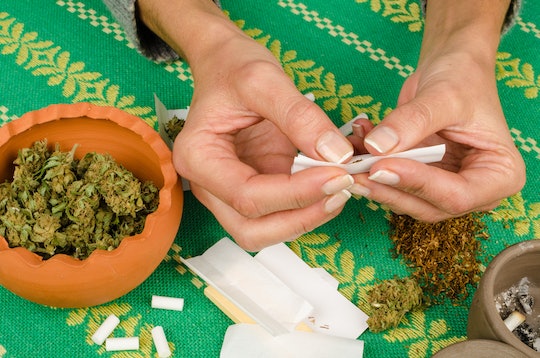 As a first-time mom, I belong to a ton of Facebook groups where I can ask questions and get advice from other parents. Although most of these conversations are kind and supportive, I've seen a few get way too heated and judgmental. One topic sure to set off a not so civil debate? Smoking marijuana while breastfeeding. I've seen moms ask things like, "Can smoking pot affect your breastmilk?", and be badly shamed for it. After researching it, however, I've found that the topic is much less cut and dry than many people think.

Not everyone smokes pot just "for fun." CNN noted that medical marijuana can be used to treat everything from chronic pain to nausea to multiple sclerosis. Additionally, The Huffington Post reported that some use marijuana to treat depression, with positive results. When it comes to breastfeeding moms, research suggests that a substance found in pot called THC will make its way into the baby's system. But the effects have not been well studied, and that may be what leads to conflicting information.

Kelly Mom noted two studies on breastfeeding and marijuana usage, one which found that infants exposed to THC had delayed motor development at age 1, and another which found the opposite— no significant delays at a year. Dr. Thomas Hale, the man who literally wrote the book on breastfeeding and drug use in Medications and Mothers' Milk, strongly advises against smoking pot while nursing, according to Breastfeeding Support. That being said, he also told U.S. News and World Report that the issue needs to be studied further.

It's also important to note that the American Academy of Pediatrics Committee on Drugs lists marijuana as a "drug of abuse" and warns strongly against any usage by nursing moms. A study found on the National Library of Medicine website referenced research which found that pot in a baby's system could cause them to become sedated, have poor growth, and could even potentially alter the brain's metabolism. If a mom smokes heavily, the study advised her to stop breastfeeding. But surprisingly, it also noted that a mom who only smokes occasionally may be able to continue breastfeeding and should talk it over with a doctor.

Beyond the effects on your baby, there are a few more things to consider when smoking pot and breastfeeding. Baby Center noted that marijuana can be contaminated with other dangerous substances, even if it's sold by a licensed dispensary. What to Expect also warned moms that smoking pot can cause problems with breastmilk supply.

Based on the not totally conclusive evidence and body of research on smoking pot while breastfeeding, it seems the best thing to do may be to have an open and honest conversation with your doctor before making any decision.