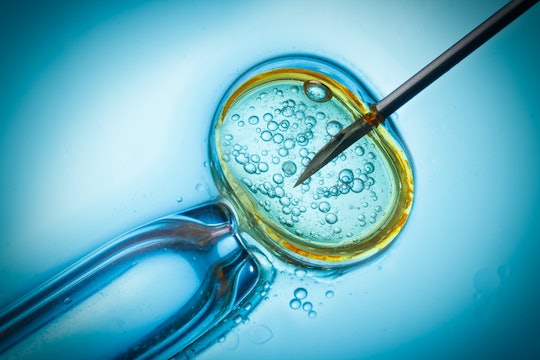 Turns Out Sperm Can Go Bad, So Here’s How Much Time You Have To Conceive

Fertility is sometimes viewed as a female responsibility, but the male side of the equation is also crucial. For instance, can sperm go bad? Sure, seminal fluid doesn't have a sell-by date, but its power can vary due to specific circumstances.

Before diving into the topic at hand, it's helpful to review the biological basics of sperm. Males generate new sperm cells all the time. In general, a human sperm cell takes about 74 days to mature, according to Shady Grove Fertility. And these cells have a lot of company. According to Oakland University, an average of 280 million sperm are found in a single ejaculate, and these swimmers tend to take somewhere from five minutes to one hour to reach the fallopian tube. Since it only takes one sperm to help make a baby, this can feel like overkill. With so many sperm around to do the job in a relatively short amount of time, what could go wrong? Well, these little cells tend to die easily.

After its release, the sperm's odds of staying viable drop immediately. If it's inside a woman's body or a culture in a lab, the sperm can remain alive for about five days, according to the Mayo Clinic. Outside of a body or lab culture, though, the sperm does not fare so well. Basically, once the seminal fluid is exposed to air, the sperm will die as soon as they dry up, as explained by Healthline. In this sense, the sperm start to go bad right after contacting air.

What if you put those swimmers on ice? Frozen sperm can last for years, perhaps indefinitely, according to Sperm Bank Directory. Once thawed, their lifespan is a little shorter than fresh sperm, though. In general, a thawed frozen sperm lives for about one day, as noted by The Sperm Bank of California. When using frozen sperm for insemination, timing it with a woman's ovulation cycle is crucial, because the window of opportunity is so much shorter than usual.

In addition to these external factors, sperm's viability can also be affected by the production side. In other words, there is something akin to the male biological clock to consider. Sure, men produce sperm throughout their lifetime, and it's possible for dudes to father children well into their 70s. But sperm count tends to decrease with age, and an older man's sperm may show more signs of DNA damage, according to Kidspot. In many cases, sperm health tends to peak before middle age.

Sure, sperm does not spoil like rancid milk. But anything from air exposure to paternal age can influence the sperm's reproductive viability. Being aware of these factors can make it easier to know when sperm is most likely to successfully inseminate an egg.