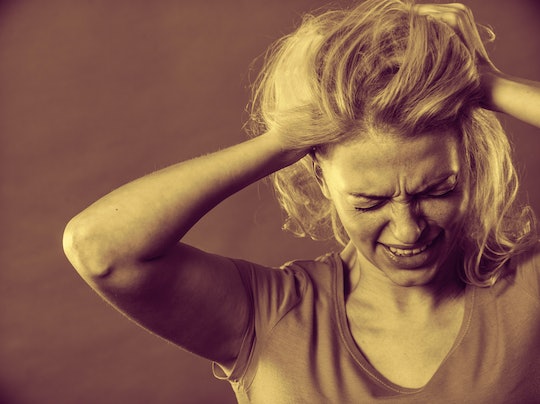 If You're TTC, Here's How Stress *Could* Affect Implantation

Stress is a powerful emotion that can affect you physically, mentally, and emotionally. And if you're trying to conceive, it's hard to know exactly how impactful any stress you may or may not be feeling could be. So, can implantation be affected by stress? According to science, yes, but, thankfully, there are more than a few ways you can try to reduce the level of stress you face in a daily basis and, as a result, increase your chances of conceiving.

According to The American Pregnancy Association (APA), implementation is described as the moment when a "6- to 12-day-old fertilized egg attaches to the interior lining of the uterus." If you're trying to conceive without medical intervention, stress may already be affecting the way you menstruate and/or ovulate. However, some studies have shown that low to moderate levels of stress don't necessarily prevent a successful implantation, especially when a woman trying to conceive is stressed about not becoming pregnant. This was found to be true among women undergoing fertility treatments, too. A 2011 BMJ study concluded emotional distress caused by fertility problems won't "compromise" any chance of becoming pregnant. If anything, researchers found that women experiencing extreme levels of anxiety and depression while going through IVF were "just as likely to get pregnant than those who didn't."

Some women have light bleeding when implantation occurs, too (usually around a menstrual period), but others don't, making it difficult to know if a fertilized egg successfully attached to the uterus or not. If implantation isn't successful, you'll know by your next menstrual cycle.

Sher Fertility, one of the largest networks of infertility clinic practices in the country, says that stress disrupts our body's process of releasing FSH (Follicle-Stimulating Hormone) and LH (Luteinizing Hormone) that help develop a mature egg. As a result, the brain might relay a message to the ovaries telling them "to stop releasing mature eggs due to intense stress or calorie deprivation," which further contributes to delayed ovulation, or no ovulation at all. When it comes to the implantation process, the second half of your menstrual cycle — also known as the "luteal phase" — can actually be greatly affected by even the slightest stress, Sher Fertility adds. If you're stressed, the release of LH could affect how long the luteal phase lasts and, as a result, a possible disruption of your menstrual cycle can occur.

Another study published in Fertility and Sterility found that women with higher levels of a substance called alpha-amylase were less likely to get pregnant that those with lower levels. Alpha-amylase reacts to your body's physical or psychological stress. Study author Germaine Buck Louis, Ph.D., M.S., director of the NICHD’s Division of Epidemiology, Statistics, and Prevention Research, said, in part, that "stress may increase with the disappointment of several failed attempts at getting pregnant, setting off a cycle in which pregnancy becomes even more difficult to achieve."

Dr. Kecia Gaither, OB-GYN, and Director of Perinatal Services for NYC Health and Hospitals, has some additional insight, telling Romper via email how complicated implantation can actually be. "There are particular proteins on the uterine lining that facilitate the embryo attaching itself, so to speak, in a normal fashion," Gaither says. "Additionally, there needs to be an adequate blood supply available within the uterine site, which will allow the developing embryo to obtain oxygen and nutrients. So in cases on stress, where the release of substances like cortisol and epinephrine are had, certain blood flow is altered which can, theoretically, interfere with normal implantation."

When it comes to the affect of stress and implantation, Dr. Gaither says it "remains to be seen," adding "there are conditions like endometriosis or PID where inflammatory mediators can impact uterine proteins responsible for implantation. But again, stress —alone— the jury, I believe, is out on that one, and more research needs to be had in that arena."

With all these possibilities and precautionary unknowns, what does it all mean in terms of a successful implantation and pregnancy? The mounting evidence suggests that even a small amount stress can potentially cause problems with implantation. If you think about it, in terms of your overall health stress in the slightest affects your daily habits. From how you eat to how you sleep, and yes, your sex drive, it only seems logical it might also have an affect on fertility in some way.

Conflicting studies only make things more confusing. It's universally known reducing stress is psychologically, physically, and emotionally beneficial, so it's safe to say you should do your best to reduce the amount of stress you face on a daily basis as much as possible. But, it's also clear more research needs to be done to quantifiably prove if stress directly contributes to the implantation process. In the words of Dr. Gaither, it remains to be seen.