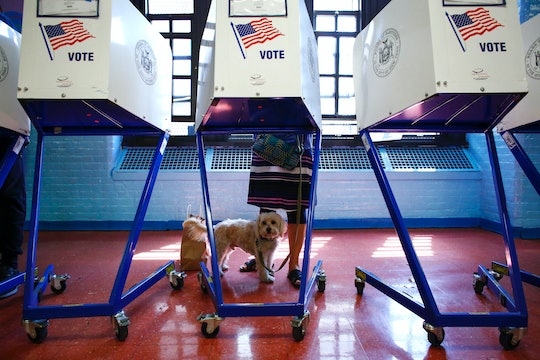 Can Superdelegates Change Their Vote? They Can, But Here's Why They Likely Won't

He may have lost to former Secretary of State Hillary Clinton in the New York primary Tuesday, but Vermont Sen. Bernie Sanders' presidential campaign has been far more successful than perhaps anyone anticipated. Despite running a campaign funded solely by small, private donations, Sanders has raised an unbelievable amount of money — $44 million in March alone — and has managed to clinch victories in a number of states. But there's one giant hurdle that is likely going to ensure that Clinton nabs the Democratic nomination no matter what: superdelegates. Although Sanders has worked hard to gain as many pledged delegates he possibly can during state primaries and caucuses, according to Vox, he is trailing Clinton in superdelegate endorsements in a major way, and those superdelegates are likely to be what cements her win. Can superdelegates change their votes? Yes — in fact, a superdelegate can change their endorsement pretty much right up until the last minute.

But even though it's possible that Sanders could round up significant superdelegate backing, it's incredibly unlikely. Even though no one expects Sanders to drop out before the Democratic Convention in July, at this point, it seems all but guaranteed that Clinton's name will be on the ballot during the presidential election.

The biggest problem facing Sanders right now is that he is significantly trailing Clinton in total delegate count. Even though Clinton has a huge superdelegate lead over Sanders (502 to 38, according to the Associated Press), she also has a pretty significant lead in pledged delegates (1,428 to 1,151) which is making it almost impossible for Sanders to catch up. In fact, according to The Washington Post, Clinton is winning the popular vote by 2.4 million more votes than Sanders.

One of the reasons for that is the very aspect of Sanders' campaign that has made him so popular: his anti-establishment stance. The hard truth for Sanders about superdelegates is that, well, they are the establishment — at least in the Democratic party. And according to The Atlanta Journal Constitution, he hasn't exactly done a great job at garnering their support. As former Pennsylvania governor Ed Rendell told the Constitution,

[Sanders] wants to woo the people he has scorned. He's insulted all of us and the process at the beginning. We are scorned lovers and it's not easy to woo us back.

Randi Weingarten, president of the American Federation of Teachers, and a superdelegate planning on supporting Clinton, agreed with Rendell. She told the paper,

I can't foresee any circumstances under which going into the convention I'd change my mind. Many of the people who support her have worked with Bernie in the Senate. There's 40 sitting U.S. senators who have endorsed Hillary. They see it up close and personal.

Of course, many superdelegates decide to cast their votes based not on personal politics, but on who has the popular vote. And thanks to Clinton's win in New York, she still comes out on top in that respect. Although Sanders' ability to win was a long shot before the New York primary, it's now almost an impossibility.

But all is not lost for Sanders. As Vox notes, he has run a campaign with huge significant for the future of the Democratic party — particularly where it comes to his ability to mobilize the youth vote. So even though it's unlikely we'll end up seeing Sanders become president, his influence during this campaign hasn't been marginal.