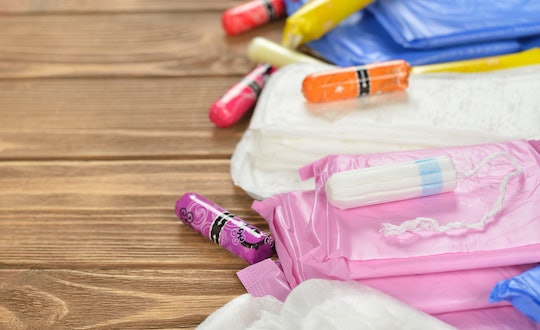 Why Tampons Might Be Hurting Your Chances Of Getting Pregnant

For most women, tampons are part of every day life for at least one week a month. We're introduced to them at a relatively young age, and then they're with us every four weeks for years on end. They're the thing we forget to buy at the grocery store until it's too late, and the thing we hate asking anyone else to buy for us. Still, for as often as us women use them, very few of us ask ourselves, "Can tampons prevent pregnancy?" While not every woman who has a period wants to or will end up pregnant, it's a question worth asking nonetheless.

When considering what tampons are made of, and how that material might impact your chances of conceiving, CNN reports, "Generally, tampons are blends of cotton and rayon, along with synthetic fibers, but each manufacturer's products are different and considered proprietary." That doesn't sound too offensive, but of course, nearly anything manufactured these days includes chemicals. Because tampons are considered a medical device, there is very little regulation of the chemicals included in them.

Tampons are increasingly getting a bad rap for the chemicals that can, and usually are, found inside them, which essentially sit inside your body for up to eight hours each use. According to an article in Time Magazine, products such as tampons, deodorant, and perfume include a set of chemicals referred to by scientists as "endocrine disruptors." According to the National Institute of Environmental Health Sciences (NIH), endocrine disruptors are "chemicals that may interfere with the body's endocrine system and produce adverse developmental, reproductive, neurological, and immune effects in both humans and wildlife." That, my friends, is enough to give any woman reason to pause before purchasing her next box of tampons.

Essentially, endocrine disruptors can mess with the hormones your endocrine system is supposed to regulate, like the reproductive system, brain disorders, obesity, and cancer. Time Magazine explains, saying, "Unlike something you swallow, substances you place inside your vagina may not go through the body's typical elimination and metabolic processes." Ami Zota, an assistant professor of environmental health at George Washington University, went on to tell Time Magazine, "Instead, tampon chemicals are absorbed by the vaginal mucosa, and from there are able to pass almost directly into your bloodstream."

Tampons also contain dioxin, a bleaching product, which is labeled by the World Health Organization (WHO) as a known carcinogen. There is less dioxin in tampons now than there used to be, but unfortunately, "its effect is cumulative" and "a lifetime of tampon use could theoretically increase your risks for disease."

Therefore, if you're concerned about your chances of conception, tampons might be something you want to consider removing from your grocery list. There are other options you have during your period, like using pads or a menstrual cup, or even special absorbent underwear that don't involve chemicals leeching into your bloodstream via your vagina. They might not be quite as drip free, but they might just help your chances of conception.

More Like This
22 Valentine's Day Pregnancy Announcement Ideas Sweeter Than Candy
Fun, Sexy Maternity Lingerie, For When The Mood Strikes
58 Perfect Literary Boys Names
Gaelic Boy Names You Won’t Hear Every Day
What Parents Are Talking About — Delivered Straight To Your Inbox