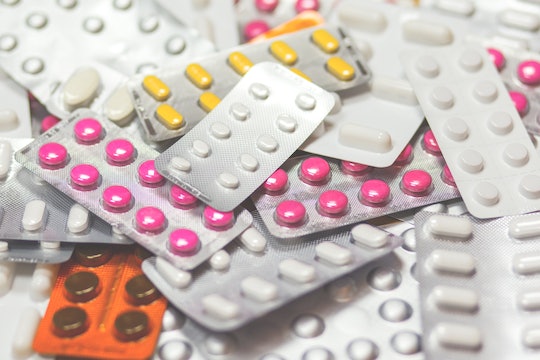 Can The Abortion Pill Be Reversed?

Over the last few years, anti-abortion activists have tried to legitimize claims that medication-induced abortions can be undone. And, in recent days, this assertion has gain new traction among abortion opponents. But can the abortion pill be reversed? Here's how it really works, because most of the science anti-abortion activists are citing isn't reliable.

On Friday, the New York Times released a mini-documentary on the so-called abortion pill reversal — an unproven procedure first purported eight years ago by Dr. George Delgado, a family physician based in California. According to Rewire, Delgado was one of two anti-choice doctors who published a paper in the Annals of Pharmacotherapy in 2012 that claimed four out of six women who took mifepristone— the first drug in the abortion pill's two-stage regimen — carried their pregnancy to term after getting a intramuscular shot of the hormone progesterone. But those accounts are anecdotal, and no scientific evidence exists to suggest there's any validity to those claims.

Still, that hasn't stopped conservative lawmakers from pushing legislation that would normalize this anti-choice pseudoscience. In 2015, Arkansas became the first state to enact a law requiring doctors to inform patients that medication abortions are reversible with a high dose of progesterone, according to the Guttmacher Institute. Arizona and South Dakota have also passed similar laws.

Some other states have tried to follow suit, but failed. Last year, lawmakers in Louisiana ordered, through a house resolution, that the Louisiana Department of Health investigate claims about the so-called abortion pill reversal. Anti-choice legislators in the state were chomping at the bit to propose a bill like the one in Arkansas, according to Rewire. But in April, the LDH returned with bad news for abortion opponents: The state health agency said it found no credible evidence suggesting that "there is a sound method to reverse a medication-induced abortion," Rewire reported.

The medical community has also widely come out against claims that medication abortions can be reversed. The American Congress of Obstetricians and Gynecologists, for example, has strongly disavowed the so-called technique, citing the lack of reliable research studies and body of scientific evidence. The ACOG has also cautioned against giving women high doses of progesterone, as it "can cause significant cardiovascular, nervous system, and endocrine adverse reactions," among other side effects.

Reversing a medication abortion is not possible, and there is no scientific evidence to suggest otherwise. Anti-choice lawmakers who continue to push legislation that legitimizes this junk science are putting their constituents in physical, mental, and financial danger by promising them something that has never been proven to work. At the same time, they're trying to legitimize the widely disproven claim that women often regret their abortions — all in an attempt to make abortion less accessible.