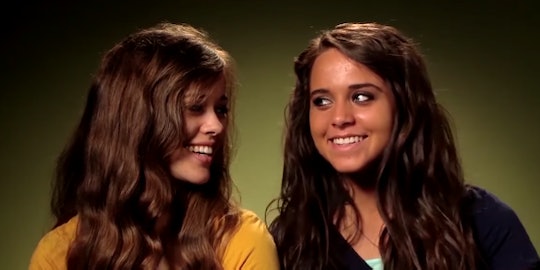 Here's How The Duggars Feel About High Heels

The Duggar family, of TLC's 19 Kids and Counting and Counting On fame, are known to have some pretty conservative beliefs. And those beliefs tend to extend to their dress and general appearance, especially for the women in the family. But what about shoes? Can the Duggars wear heels? According to mom Michelle Duggar, there are apparently no "modesty issues" for footwear. Or at least, she doesn't think there are a lot of ways to be "immodest" when it comes to shoes, so maybe don't show her some of the creepier corners of the internet anytime soon.

In a video from 2014 from an episode of 19 Kids and Counting, many of the older Duggar girls went shoe shopping in advance of daughter Jill Duggar's wedding. She instructed them to find shoes that were fairly neutral in color, but other than that, she pretty much let them go to town on whatever type and style of shoe they wanted to wear for the big event. As long as the dresses all matched, she explained that she didn't really care what her sisters had on their feet. So it was made pretty clear right off the bat in the clip that there aren't a whole lot of rules when it comes to footwear in the Duggar household.

Michelle was specifically asked about shoe modesty in the same video, and she told the interviewer:

Our family does not have any modesty issues for footwear. There's not really a whole lot I think you could do that would be immodest with a shoe. Maybe, I don't know.

That's an important distinction to make, because when it comes to other clothes, the Duggar family tends to be more strict about what is allowed. There are specific, conservative rules about what the girls are supposed to wear, for example. They have to keep their shoulders, cleavage, and thighs covered, according to The Daily Mail.

In fact, Michelle wrote a blog post for TLC in 2012 on modest wear. When it comes to what needs to be covered in their family, she wrote:

...for us, we felt like we needed to be covered from our neck to below our knees mainly because God talks about the thigh being uncovered, and how that's nakedness and shame.

And so in our dress — whether we're doing activities that require us to climb, ride a horse, bike, swim, whatever — we just want to keep the thighs and torso covered; we don't want to play peekaboo so that there's a visual element that might defraud someone.

For the record, defrauding someone means "to stir up desires in someone else that cannot be righteously fulfilled," in Michelle's own words.

So it appears that all of the family members are expected to follow the rules to keep most of their bodies covered with clothing, though it's the Duggar women who seem to get the most attention for their modest wear.

The older girls and young women were asked about their style rules for People's "Most Beautiful" issue back in 2015, and in the video clip above, the only thing that was said about heels was that Michelle "just can't do them." That doesn't mean they're not allowed, they're just a fashion "don't" for the Duggar mom.

Recently, daughter Jinger Duggar Vuolo received some attention for wearing shorter skirts and heels, as well as pants. Plus, Michelle wrote in 2013 that her daughters should work "with the Lord" and their spouses to determine what modest dress means for them. That might mean shorter skirts, pants, and heels for Jinger (though it is still really cool to see her break out a little bit from the way she was raised, I will admit).

One thing that does seem super important to the Duggars, no matter the gender of the person, is wearing clothing that they deem appropriate for that gender.

In the 2012 blog post, Michelle wrote that dressing for "distinction (determining whether you're a man or a woman by looking at someone)," is fundamental to the family. And in the 2013 piece, she wrote that her daughters are taught to dress in attire that is "definitely more feminine" as they grow up. So it's a safe bet that the Duggars won't be advocating against gender roles in clothing — or footwear, for that matter — anytime soon.

So although the Duggars are allowed to wear heels, the boys are probably strongly discouraged from doing so, if you catch my drift. And it sounds like Michelle, at least, isn't a fan of them. The Duggar daughters do have a little more freedom when it comes to footwear, and as married women, it sounds like some of them take advantage of that freedom. Good for them.