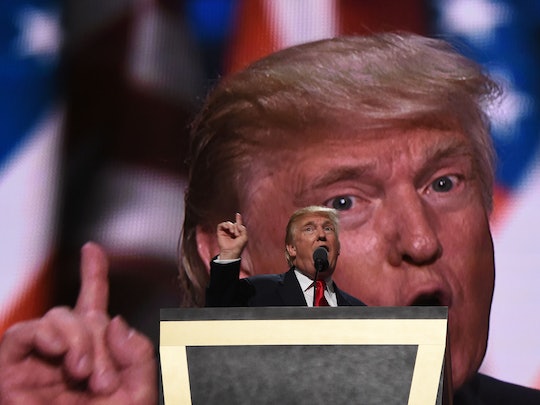 Can The Electoral College Stop Trump From Becoming President? It's Possible, But Unlikely

In the wake of the election, there are a lot of Americans wondering if there's any possibility Donald Trump will not actually become president. Frustrations continued to mount the day after the election when it was revealed that Hillary Clinton won the popular vote, yet Trump was still elected based on votes cast by the electoral college. Now, some are wondering: can the electoral college stop Trump from becoming president?

Petitions started circulating almost immediately, calling on the electoral college to block Trump from the White House. A post on Tumblr, originally posted by user ladylokiofmidgard, went viral after it started making the rounds on Wednesday, igniting a conversation on social media about the power — and deep flaws — of America's electoral college. In the post, the user points out firstly that the electoral college doesn't actually cast its votes until Dec. 19. That's true – on election night, these "elected electors" from each state pledge their votes for a candidate after the results of the state's popular vote come in. But they don't actually cast that vote until the oddly specific date of the first Monday after the second Wednesday in December, as laid out by the Instructions to State Officials for the electoral college.

The elected electors for each state are nominated by their political party, and they are a human representation of each of the state's available electoral votes. They don't cast their electoral vote on election night, but instead, wait to see if the popular vote is in favor of the candidate they've pledged their vote to.

What the Tumblr post being passed around social media has people asking, then, is could an elected elector change their mind when they vote on Dec. 19? Could they actually decide to vote the other way? And if they can, how many of those electors would have to change their mind in order for Trump to lose?

The fact that more Americans voted for Hillary Clinton than they did Donald Trump, yet he still won, is hard to understand without the context of the electoral college. It doesn't matter how many individual votes a candidate gets in each state, because each state still only has so many electoral votes to give — and that's what ultimately decides the election.

That being said, it's not like elected electors haven't changed their votes before. In fact, in the history of the electoral college, 157 electors have done exactly that. They're called "faithless electors," and these are the voters who do not end up casting their electoral vote for the candidate chosen by their party.

According to the archives of FairVote.com, 71 of the 157 faithless electors changed their votes because the candidate they were supposed to be voting for died, but 82 were changed because the elector no longer agreed with the party's choice (if you're doing the math, that leaves three — they abstained from voting altogether).

The question, then, is how many faithless electors would be needed to bump Trump out of the presidency? Again, it depends on what state's they're from. It wouldn't take as many individual faithless electors in swing states, or states like California that have a large number of electoral votes, changed their minds.

Looking at the math, if those electoral vote-heavy states like Florida, Pennsylvania, North Carolina (with 15) all flipped their votes to Clinton, she could get the electoral votes she needs. Since Trump won with 279 total, he could lose 9 votes and still have the 270 he needs – so in addition to the 42 that would bring Clinton up to 270, Trump would also need to lose that 9.

That being said, it's extremely rare to have faithless electors in the electoral college: A The New York Times analysis indicated that electoral college voters vote according to their pledge 99 percent of the time.

The last time the electoral college had a faithless elector was in 2004. The individual was never revealed (the votes are cast anonymously), but it was a democrat from Michigan. Many believe it might have actually been a mistake: the elector had pledged their vote to John Kerry, but ended up casting their vote for John Edwards instead.