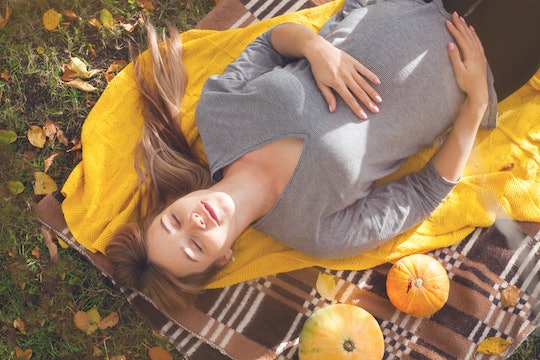 Hoping The Fall Equinox Will Send You Into Labor? Here's What You Should Know

I've always seen fall equinox marked in every planner I've ever owned, but I'd never known what it actually means — aside from being the "official" beginning of fall. According to Encyclopedia Brittanica, the autumnal equinox is one of two moments during the year when "the Sun is exactly above the Equator and day and night are of equal length." This year, the fall equinox falls on Saturday, Sept. 22, and many believe it can mark the beginning of another season of life, too. Is it true? Can the fall equinox make you go into labor? I'm sure many super pregnant women are crossing their fingers and toes that the fall equinox will start their contractions and get that baby out, but will they be sorely disappointed? Let's break down where this idea comes from.

The idea that human fertility is linked to the seasons is not new — and it's not hippie nonsense, either. According to a 1990 New York Times article entitled "Seasons Sway Human Birth Rates," author Natalie Angier explained how the seasons can play a role in our own reproduction. "But in a comprehensive report in the current issue of The Journal of Reproductive Rhythms, researchers present a wealth of data showing that human fertility rates are also influenced by the seasons," Angier wrote. "...while human reproduction is far less seasonally dictated than that of other creatures, it rises and falls in distinct patterns throughout the year." Angier goes on to explain that those glorious, not-too-hot and not-too-cold days in spring and fall are prime baby-making days, or the "optimal fertility season." If seasons can dictate when we make a baby, can they also dictate when baby makes their appearance?

One reason many women prepare to give birth around the time of the fall equinox actually has nothing to do with the equinox and everything to do with the Harvest Moon. The Harvest Moon is the closet full moon to the fall equinox — this year, the full moon falls on Sept. 24 — and for centuries women have believed full moons have the power to induce labor. According to How Stuff Works, "It's called the lunar effect, and, as far as births are concerned, the primary explanation for the effect focuses on the moon's gravitational pull. It basically states that much the way the moon's gravity controls the tides, it can control a woman's body." Well, that seems like it makes sense... right? Full moons have all sorts of supernatural effects, so it doesn't seem like too much of a stretch to think they can induce labor.

Well, the science doesn't back it up. Study after study through the years have shown that there is no real link between full moons and increasing numbers of kids. How Stuff Works sums it up: "The topic has been studied pretty extensively, though, and it's very easy to find evidence disproving the connection." Plenty of people will offer anecdotal evidence ("My cousin's friend's sister had all her babies on full moons!") but you won't find any cold hard facts backing this theory up.

There are so many different old wives' tales about various things that can induce labor, like changes in seasons and cycles of the moon. While there's nothing wrong in reading up on them (and crossing your fingers), try not to get your hopes up. As I'm sure you've heard — and probably hate hearing at this point — your baby will come when your baby is ready to come. Eat some spicy food, go for a long walk, and take bets on whether your little one will be a summer baby or a fall baby.

More Like This
Are Boy Babies Usually Late? Signs Your Baby May Be Born Late
Here’s How To Combat Performance Anxiety When Trying To Conceive
27 Sweet & Strong Boy Names That Start With “S”
25 Baby Girl Names That Begin With D