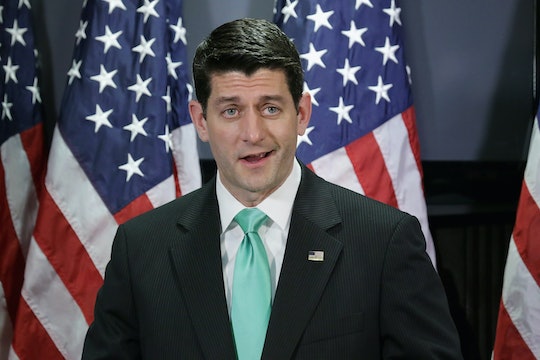 Can The GOP Nominate Paul Ryan For President? It's Not That Easy

Ever since real estate mogul and steak aficionado Donald Trump started to pull ahead in the Republican presidential primaries, there have been rumblings about how the GOP would pull some political strings at their convention to block the billionaire from becoming the nominee. Today, former House Speaker John Boehner made a bold move by endorsing someone to throw into the mix: current Speaker Paul Ryan. But can the GOP nominate Paul Ryan for president for real?

They totally could. It would be a very brazen political move, but with a little Frank Underwood-style maneuvering it could actually happen.

Don't worry if you didn't pay attention in high school civics and none of this makes sense. A brokered, or contested, convention (that's what it's called) is a rare thing. The last one happened in 1952 when the Democrats had the opposite problem of today's GOP— no candidate was even coming close to having enough delegates to win outright. Essentially, all hell breaks loose and there are various rounds of votes among the delegates and probably lots of late night cocktails and dealmaking, because that just makes it sound so much more exciting all around and I watch too much television.

A brokered convention may sound unfair to Trump supporters, but despite our democratic notion of voting for delegates in the primary, it's important to remember that the two parties are committees and run more like a Fortune 500 company's board than a show of hands sort of vote in the school yard. If the GOP doesn't want Trump to be their nominee, there are guidelines about how to get another guy in.

The rule is that the GOP nominee needs 1,237 delegates to win. Trump has suggested that a plurality of votes should be enough for him to win the nomination. Trump told CNN on Wednesday that he thinks he can still win before the convention, saying,

I think we'll win before getting to the convention, but I can tell you, if we didn't and if we're 20 votes short or if we're 100 short and we're at 1,100 and somebody else is at 500 or 400, because we're way ahead of everybody, I don't think you can say that we don't get it automatically.

But that's not really up to him. If the party was united around him, he would have no problem missing the mark by a even a few hundred delegates. But it looks like mathematically, he'll be a little more shy of that 1,237 and the GOP is not quite sure they want to go steady with the candidate yet. With all that drama, it's no wonder that Trump is starting to suggest alternative ways to a guaranteed win.

Trump, along with Texas Sen. Ted Cruz, has suggested that there would be riots and straight up revolt if the party decides to throw another candidate into the game. Cruz also told CNN that he thinks the way to beat Trump is "at the ballot box" and not through backroom politics. But he might be biased. Cruz, just behind Trump in his delegate count, would be completely pushed out in a brokered convention given that he, too, makes the GOP a little nervous as a conservative candidate.

A brokered convention would be like Super Bowl Sunday all over again for political junkies. It's political mayhem. That Trump has split the party enough to break out the old rulebook and start brainstorming about how to block him from running for president is a very big deal. If they do go forward with endorsing another candidate at the convention, Trump will likely run as a third party candidate, which is an idea he's floated since he announced his candidacy.

That alone could lead to an even more complicated general election. So the GOP has to think about whether they want to risk splitting Republican votes and possibly guaranteeing a Democratic win in November, or rallying behind Trump, a guy they just aren't sure about but has garnered noteworthy support.

It's like Game of Thrones meets House of Cards. With a little Veep, because let's face it, this whole 2016 election cycle is starting to get lol-worthy. Or renew-your-passport-and-run-for-the-hills worthy.

So, the short answer is that, yes, the GOP could nominate Paul Ryan for president. Whether he wants it or not is a whole other story. Early Wednesday afternoon, a Ryan spokesperson said that he would probably not accept the nomination if offered. But the convention is still a bit off. Depending on how real the struggle becomes for the GOP, the Speaker could very well change his mind.

Or, of course, the GOP could find someone else to take his place. Or Donald Trump and Cruz will fight to the very, bitter end. Or a meteor strikes Earth and this whole thing was for naught. Really, at this point, it would be ill conceived to start seriously taking any bets about who Americans will be voting for in November.