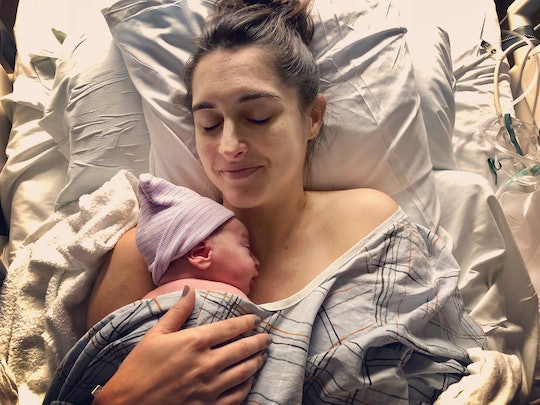 Can You "Game" The Labor & Delivery Triage System?

One of the biggest unknowns throughout my pregnancy was always the actual act of going into labor. I had an irrational fear that I wouldn’t know when I was having contractions . I read about the “5-1-1 rule,” meaning it’s time to head to the hospital when contractions come every 5 minutes, each lasting one full minute and going on that way for one hour. In my doctor’s busy New York City practice, she called it the 4-1-1 rule (and even said I could stretch it to 3-1-1). At the time, I wondered why anyone would wait that long. I’d head to the hospital the second I felt a contraction, of course! They’d pop in my epidural, the baby would come out a few hours later and we’d all blissfully head home the next day. Ha. All of that is complicated by a little thing called labor & delivery triage – more fondly referred to by me as labor jail.

Triage is a woman’s first stop after arriving at the hospital and before being admitted to a Labor & Delivery (L&D) room. Lindsay Helms, a labor and delivery nurse at Carolinas Medical Center in Charlotte, North Carolina, evaluates women when they arrive at triage based on their complaint: water breaking, contractions, decreased fetal movement, vaginal bleeding or hypertension. Every woman who is greater than 24 weeks pregnant receives at least 20 minutes of fetal monitoring and has their vital signs checked. “Typically, if a woman is dilated 6 centimeters or more, we would admit them to labor & delivery quickly,” Helms tells Romper. “However, there is a lot of grey area with early labor. Sometimes being a triage nurse is tough, because we are viewed as the ‘bearers of bad news’ when we’re told by the patient’s provider to discharge them.”

There seems to be a disconnect between women being told to head to the hospital by their doctors, the people they’ve trusted throughout nine months of care, and the hospitals treating childbirth as a non-urgent matter.

In labor jail, it’s the classic game of hurry up and wait. I was told by my doctor to head to the hospital for decreased fetal movement at 40 weeks and 5 days pregnant when I hadn’t felt my little guy kick for a few hours in the morning. At L&D triage, doctors determined I had low amniotic fluid and decided to admit and induce me. Because I hadn’t naturally progressed at all on my own, I was very low on the totem pole of women waiting to snag one of the 13 L&D rooms at the hospital (13! For a hospital that delivers almost 5,000 babies per year). And so I waited. For eight hours I waited, moaning to my husband about my stubborn cervix, the food ban they put me on, and the fact that I hadn’t showered before coming to the hospital (I envisioned my birth look a little more Kourtney Kardashian’s and a little less Katherine Heigl’s in Knocked Up). A resident who came into the room to check me at one point surprisingly exclaimed “You’re STILL pregnant?!” Spoiler alert: I banned him from my line of sight for the remainder of my hospital stay. I was hangry, frustrated and exhausted by the time I finally got moved to a labor & delivery room around midnight.

My story is not unique. There seems to be a disconnect between women being told to head to the hospital by their doctors, the people they’ve trusted throughout nine months of care, and the hospitals treating childbirth as a non-urgent matter that they’ll squeeze in between an ultrasound and a coffee break.

At most hospitals, there are simply not enough labor rooms for the volume of women arriving in early labor.

Bendick luckily made it to a L&D room in time for the birth of her daughter, but Helms has seen five deliveries in the triage area in her four years as a triage nurse. Triage, while equipped to physically handle a delivery, is far from ideal. “There are vast differences between a triage room and a labor room,” Helms explains. “Each triage bay is separated by a curtain, so they are not private. We have a single baby warmer, a single restroom and only one family member is allowed to be present due to the limited amount of space. One labor room is larger than our entire triage area!” At most hospitals, there are simply not enough labor rooms for the volume of women arriving in early labor.

So how can you pass go, collect $100 and avoid your stay in labor jail? Helms encourages her patients in early labor to stay home, try relaxation techniques (such as music, aromatherapy or massage) and head to the hospital when contractions are strong and consistent (that darn 5-1-1 rule is true after all). She highly recommends the use of a peanut ball to open the pelvic outlet and promote dilation (a 2011 study found it shortened the first stage of labor by 90 minutes!).

Ultimately, mother’s intuition is real, and after nine months spent growing a human, women know their bodies better than any doctor, midwife or nurse. Be clear in your communication about signs of labor, be firm in your need for assistance… and be 6 centimeters dilated.