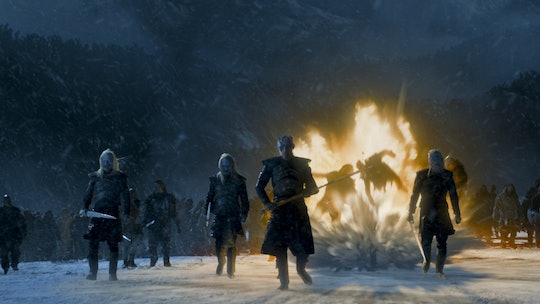 Can The Night King Die On 'Game Of Thrones'? That Would Solve A Lot Of Problems

So, it looks like Game of Thrones finally has a Big Bad. The show's narrative initially tended to steer away from black and white, good vs. evil types of showdowns, as we could see with all of the complicated political maneuverings going on in King's Landing. But, it looks like things are about to get a whole lot more cut and dry with the emergence of the Night's King. It looks like the show is gearing up for what is sure to be an epic showdown between men and The White Walkers. But, like the White Walkers are famously difficult to dispatch, can the Night's King even be killed? If he can, most Game of Thrones scholars predict that it will be done by The Prince That Was Promised/Azor Ahai/The Stallion Who Mounts The World — take your pick of messiah figures.

The wights, those resurrected zombie people, will not be deterred by the stab of a sword, but one good bonfire and those suckers are literal toast. The White Walkers, however, are autonomous, presumably intelligent creatures who don't seem to be quite as sensitive to flames. They can be killed by obsidian, also known as dragonglass, or Valyrian steel, also known as dragonsteel (are we noticing a pattern here?). We saw Samwell Tarly kill one in Season 3, Jon Snow got one at the Battle at Hardhome in Season 5, and in Episode 5 of Season 6, Meera got a White Walker by throwing a spear at one's throat (it was probably tipped with dragonglass). So it would appear that the White Walkers are not 100 percent invincible, thankfully.

But if that's the case, then why didn't the Night King die thousands of years ago? According to legend, he was defeated by Brandon (the Breaker) Stark around 8,000 years ago, after he fell in love with a woman with "eyes like blue stars" who's skin was "cold as ice," — so, a White Walker presumably — declared himself Night's King and committed such atrocities that, since his defeat, it was decreed that his name was never to be spoken again. But, if he's back now, does that mean he was never killed? Does that mean it's impossible to kill him? What might that imply about the consequences of the Night King's death? Would that be the end of all White Walkers?

As it stands, either Danaerys is at some point going to swoop in with her dragons and just fire-blast these guys to death once and for all, or the story is a lot more complicated than it seems.