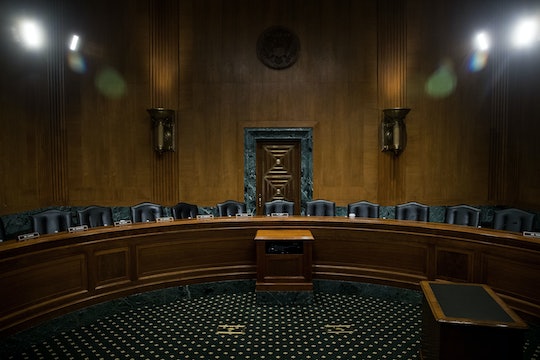 Why The Senate Can't Filibuster The AHCA

President Donald Trump’s plan to repeal and replace the Affordable Care Act is one step closer to becoming a reality now that the House of Representatives just passed the GOP’s latest version of the healthcare bill, officially known as the American Health Care Act. But it still has a ways to go until it’s the new law of the land. The next step: It goes onto the Senate for review and will likely face substantial changes. There are a few scenarios that could go down here, but the Senate filibustering the AHCA won’t likely happen and here’s why.

Republicans can bypass a filibuster because the GOP plans to pass the new bill by using a complex strategy that employs a certain budgetary tool — specifically the Senate’s budget reconciliation process — that would essentially block Democrats from filibustering... which then allows the bill to advance with only a simple majority of 51 votes rather than 60. Basically, this tactic makes it much easier to pass major legislation more quickly.

To put it simply: Republicans aren’t treating the AHCA as a regular bill, instead they are trying to pass it as a reconciliation bill that contains changes to existing law to reconcile something within the budget. In this case, Republicans argue the bill’s new provisions — including one that allows states to apply for waivers so that insurance companies can use a person's health status to determine premiums — have a direct connection to the budget’s spending, taxes, or the overall deficit. But, as The Hill reported, Democrats are expected to argue that the new GOP healthcare bill will not meet these rules.

According to The Washington Post, two likely scenarios could happen while the bill is in the Senate: The ACHA will get "radically changed by the Senate" and then fail when it goes back to the House or both houses will work out a "compromise in the conference committee that majorities of both houses can support." And it's very likely that it will go through some revisions before anything official can happen, if only to meet the rules of this special tool.

"I suspect the bill the House passes will be modified if for no other reason that the reconciliation rules would require it," Republican Sen. John Cornyn of Texas told The Hill of the AHCA. As The Hill reported on Thursday, other GOP senators are already saying that the healthcare bill needs to change for more reasons than just to meet the Senate's requirement for bill reconciliation.

Whatever happens next with the GOP's plans to repeal and replace the ACA, it will likely be a while until any new laws go into effect — even with this shortcut.