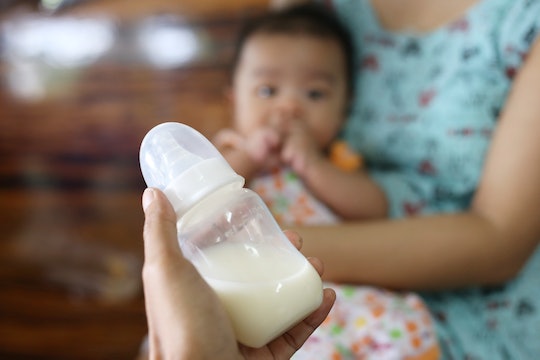 TSA's Rules On Traveling With Breast Milk Are Frustratingly Vague

Considering the stink eye parents routinely get from other passengers when their kids cry on a plane and the sheer exhaustion of wrangling tiny, tired, and cranky humans through an airport, flying with kids is more often than not one of the great challenges of parenting. But it's not just the physical presence of babies and toddlers that can make air travel a nightmare for moms. Nope, airport security can add a new layer of hair-pulling frustration for breastfeeding moms. That's because TSA has been known to confiscate pumped breast milk. As anyone who has flown in the past decade or so knows, TSA has pretty strict rules regarding liquids in carry-on bags — but that doesn't make it any easier when moms have to see that carefully pumped and cared-for milk go into the trash.

Technically, the Transportation Security Administration (TSA), has mechanisms in place to protect a mom's breast milk from meeting that fate. Breast milk (as well as formula and juice) are permitted in carry-ons in quantities larger than the typical 3.4-ounce limit on liquids, according to the TSA's website. "Reasonable quantities" of such substances should make it onto the flight, although they must be removed from their bags to be screened separately, and are typically subject to being X-rayed.

The guidelines are pretty reasonable, as TSA agents are working to prevent bad actors from making liquid explosives in-flight — as has been attempted before. Still, the reality of what happens to parents' breast milk doesn't always match the carefully laid-out rules.

One Colorado mom of a 3-month-old for example, reportedly ended up crying in an airport in June after TSA agents claimed that her pumped milk had tested positive for explosives and dumped it all, according to ABC affiliate WMAR. TSA ultimately apologized. An anonymous dad reported a similar experience not long before that. TSA has even called the bomb squad over breast milk.

And in 2015, actress Alyssa Milano took to Twitter to express her outrage when security officials at London Heathrow Airport confiscated 10 ounces of her own pumped breast milk. At the time, Heathrow responded to her to explain that breast milk was subject to the 3.4-ounce rule if the baby was not present.

Milano's (extremely unfortunate) experience presents an important distinction. The TSA's rules are applicable at all airports in the United States, but not in many other places, such as London. (TSA rules at U.S. airports do not require the child to be present for quantities of breast milk on a carry-on to exceed that 3.4 ounces figure.)

So, it's important for anyone traveling with breast milk to do their research and know their rights, according to Mommy Nearest. That includes familiarizing yourself with the specific rules at international airports. Another option is to include larger quantities of breast milk in checked luggage whenever possible, and to remember to declare it when doing so. Finally, Mommy Nearest's recommendations include waiting to pump until after you've made it through airport security, although that's not always the most feasible option. What if the mom had been pumping the breast milk over the course of a few days during a business trip to bring home to for her baby, for example?

The fact is that traveling can be incredible unpredictable, and no amount of preparation will stave off the unexpected when it comes to breast milk and airport security. In a perfect world, new moms would be able to teleport to their destinations, or at least get the benefit of the doubt at airport security, but the latter likely will never be the case as long as the TSA is truly dedicated to keeping people safe. Perhaps technological advancements for screening milk will soon make the process better for everyone, though.

More Like This
Fun Ways To Celebrate National School Nurse Day
First Look: The New Jujube x Lilo & Stich Collaboration
17 Best Potty Training Products For Toddlers
From Captions To Gifts, These Are All The Kindergarten Graduation Ideas You Need