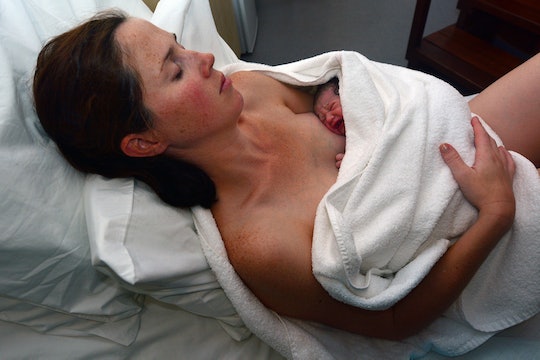 Yes, You Can Get Sewn Up Tighter After Giving Birth, But It's Not Recommended

Chances are you've heard of something called "the husband stitch," which is as cringe-worthy as it sounds and basically means getting an extra stitch after delivering vaginally. But is that actually a thing? Can they sew you up tighter after giving birth? The answer may spark some icky and disappointing feelings.

According to Babble, it turns out that back in the day the idea of getting sewn up tighter was referred to as the "husband stitch" which was performed for the intent of making sex more pleasurable obviously for the men, though it was argued that it would make it better for the woman as well (we'll get more into that later). While the origin seems like it would be obvious — we're imagining some new father making the crass request to his wife's doctor to add in an extra stitch, just for him — let's first familiarize ourselves with the episiotomy. Apparently, because women often tear or occasionally have to get an episiotomy (a cut between the vagina and anus to help with the birthing process), there was the question of whether or not doctors would sew patients up tighter afterward. While it's safe to admit that a lot of practices in the past were not scientifically accurate, it's pretty disturbing to think that some unnecessary practices are still happening today, despite what the most recent research shows.

For years, an episiotomy was thought to help prevent more vaginal tearing during childbirth and heal better, according to Mayo Clinic. In modern medicine, however, research shows that this isn't the case and that episiotomies can actually cause more harm than good. Because of this, routine episiotomies are no longer recommended and should only be done when there's a legitimate medical need.

The progress and research surrounding episiotomies goes hand in hand with getting sewn up tighter after birth. Yes, getting sewn up tighter was a thing. And it sometimes still occurs. The aforementioned Babble article noted that the extra stitch is done with the intent to make sex more pleasurable after birth, but in fact, it often does the opposite. Instead, moms are more sore, sore for longer, itchy, have difficulty moving around, and can be too uncomfortable to have sex.

Columbia University's Go Ask Alice shared that an extra stitch after vaginal tearing or an episiotomy is not needed and not necessary. If women are concerned about staying tight and keeping their vaginal muscles strong, they can turn to prevention or strengthening exercises afterwards, with something like Kegels. Or if you really want to go all out, maybe take a page from Goop Goddess Gwyneth Paltrow by using a yoni egg to strengthen up down there (after you've healed, of course).

To this day, there are women and practices that still participate in "the husband stitch," according to Fatherly. In their interview with OB-GYN Dr. Lakeshia Richardson, however, she shared that it's not standard or common anymore, and the only times she's done one is after strongly advising her patients against it. So moms, please don't feel like this is something you need or should do to tighten up down there.

If this is something you've heard about and considered for yourself, it's a good idea to account for all the information on why it used to be a thing and why it probably shouldn't be now. Although it may seem like a logical idea on the surface, it's actually not necessary at all, so we advise having a conversation with your OB-GYN as well as the doctor on call who ends up delivering your baby (because it might not be the same doctor that you've been seeing regularly for the past 9 months) to be clear on your stance about episiotomies and "extra stitches".

Because episiotomies and the husband stitch can cause unnecessary pain and discomfort, it's not the most natural or safest route to take, and while it's intended to enhance sex, it can actually do the opposite. Additionally, you can do exercises yourself to tone and strengthen your pelvic floor muscles and vaginal area before and after birth, without a needle's intervention.