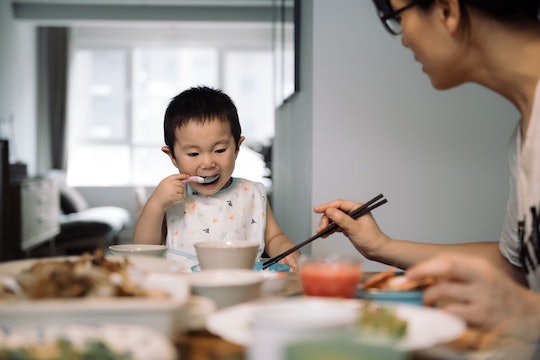 Can Toddlers Eat Shrimp? Because You've Got The Grill All Ready

Summer means some of my favorite foods are in the dinner rotation: watermelon and feta salad, an occasional and well-timed hot dog, fresh corn, and grilled shrimp. Parents, especially those who prefer feeding their whole family the same dinner, may be wondering... can I feed my toddler shrimp? The answer, in short, is yes.

One of the greatest joys of parenting is introducing your toddler to new foods. It opens up a new world, one filled with snacks, pizza, and other iterations of melted cheese. It can also bring up unexpected stress: Is this cut into small enough pieces? Will it end up enmeshed in the fibers of my carpet? What if my child has an allergic reaction? This fear can be especially prevalent when feeding your child food that is known to cause allergies; according to the organization Food Allergy Research & Education (FARE), 90 percent of all food-related allergic reactions are caused by eight foods: milk, eggs, peanuts, tree nuts (walnuts, almonds, cashews etc.), wheat, soy, fish, and shellfish.

While your natural inclination is probably to scoop your child up and sprint in the opposite direction of anything, food or otherwise, that could cause harm, The American Academy of Pediatrics (AAP) says, "there is no evidence that waiting to introduce baby-safe (soft), allergy-causing foods... beyond 4 to 6 months of age prevents food allergy.”

In fact, some doctors including Dr. Natasha Burgert, pediatrician at Pediatric Associates in Kansas City, Missouri, think the early introduction of certain foods, including shrimp and shellfish, can actually be beneficial. Dr. Burgert says, “Early introduction of shellfish is a way to prevent food allergy. There is no reason to delay introduction. Shrimp should be offered as a first food. There are minimal risks if the way the food is offered is developmentally safe.”

Dr. Purvi Parikh, allergist and immunologist with Allergy & Asthma Network, echoes a similar idea, saying it is safe to feed a child shrimp and other shellfish “as early as 4-6 months as long as the consistency is something a child can safely eat and swallow.” This means making sure the pieces are in very small, bite-sized pieces for toddlers (children ages 1-3) or blended for younger children. Pureed shrimp, basically a shrimp smoothie, probably does not sound particularly appetizing to you (nor to me if I’m being honest) but this is a safe way to expose them to new flavor and a dose of protein, antioxidants, selenium, and choline.

A shellfish allergy is not the same as an allergy to fish, so even if your child has tried fish before, it’s a good idea to introduce shellfish separately. Whenever possible, avoid introducing too many foods at the same time because if an allergic reaction does occur, it’s hard to find what caused it, much like trying to find a minuscule Lego man’s hat in a cavernous box of Legos... not that I’ve ever spent 45 minutes doing that for a screaming toddler or anything.

According to Healthy Children, the website provided by the American Academy of Pediatrics, the recommended serving size of seafood for children ages 2-3 is one ounce; as a reference point, the average serving size of fish or shellfish for adults is typically between three and four ounces (which is visually about the size of a checkbook). The number of shrimp that equates to an ounce depends on their size, but one or two shrimp should be enough for a toddler.

If a parent is allergic to shrimp, it is more likely that their child will also be allergic. Dr. Parikh says, “having a parent with any type of allergy increases risk [in their child] but we actually [still] recommend early introduction of the high risk foods to avoid it becoming an allergy.”

While giving toddlers shellfish is largely considered safe, it's estimated by FARE that around 1.2 percent of the U.S. population is allergic to shellfish, and unfortunately, this type of allergy is not likely to be outgrown. So how do you know if your child is having an allergic reaction?

"Rash, itching swelling which may or may not be accompanied by vomiting, diarrhea, wheezing coughing, lethargy or loss of consciousness. The reactions usually occur within 30 minutes to an hour [after] eating a food,” Dr. Parikh says. The Mayo Clinic notes that signs of a shellfish reaction may also include dizziness, lightheadedness, and hives. Signs of a serious, anaphylactic reaction include a swollen throat, difficulty breathing, a drop in blood pressure, and dizziness or fainting.

All allergic reactions in children, regardless of how mild they may seem, should be “evaluated by a physician because it’s hard to know which will progress,” says Dr. Parikh. If your child is conscious and showing signs of a reaction, Dr. Burgert says to give Benadryl and call their doctor for next steps. In the case of a serious reaction, loss of consciousness, or constriction of the throat, call 911 immediately.

The general consensus is that shrimp is safe and delicious (I only polled myself on that last one). Shrimp are a good source of protein, provide important nutrients, and are rich in Omega-3s. You may want to avoid introducing new foods when you are far away from a pediatrician you trust, and especially if you are away from WiFi or cell service on a camping trip, for example, and if you take your kids camping you’re the real MVP. As long as the shrimp is thoroughly cooked, cut into small pieces or pureed, and you keep a lookout for signs of an allergic reaction, feeding your toddler shrimp is a safe and healthy addition to their diet.