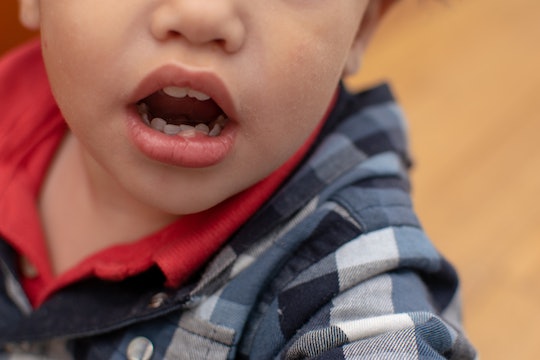 Sorry But Yes, That Weird Thing On Your Toddler's Lip Could Be A Cold Sore

Toddlers are notoriously germ-infested creatures, and there's truly no end to the parade of pathogens that seems to follow them around everywhere. Bearing that in mind, it shouldn't really ever come as a surprise when a toddler catches just about any kind of illness... but for some reason, people don't generally associate toddlers with certain ailments. Case in point: Can toddlers get cold sores? You might think of the so-called "fever blisters" as more of a teenager's problem, but the truth about this pesky viral condition might surprise you.

Cold sores have nothing to do with colds, in case you didn't know, but they can get terribly sore (so the name isn't entirely misleading). They're also known as oral herpes and fever blisters, as the American Academy of Pediatrics explained on their website... with "blisters" as probably the best term to describe the fluid-filled bumps that appear on the lips (as well as the chin, cheeks, and nose sometimes, too). They don't usually hang around for too long (maybe a few days until they start to ooze and form a crust, though complete healing takes a couple of weeks on average). Most kids will have already come down with their first cold sore by the age of five.

If the "herpes" part is throwing you off in relation to your toddler, here's what you need to understand:

As common as these infections are, one would think there would be less of a stigma about cold sores, but even an adorable toddler with a raging fever blister on her lip will make people nervous. To be fair, no one wants to catch a cold sore from anybody, even the cutest kid in the world.

Plus, there is one demographic that truly is at risk when it comes to HSV-1... babies. Parents everywhere were heartbroken over the 2017 story about a baby who caught the HSV-1 virus and died when it turned into viral meningitis, causing the baby's organs to fail. At the time, pediatrician Dr. Tanya Altmann told CNN that while it's not uncommon to catch the herpes simplex virus, it's extremely rare for it to develop into meningitis. Still, "rare" is not "never," which makes cold sore season especially stressful for parents with both a newborn and a toddler.

If your toddler comes down with a cold sore, which, again, is a real possibility, cold compresses and sometimes prescription or over-the-counter meds can help. There are also some steps you can take to stop the virus from spreading to the rest of the family. BabyCenter recommends the following measures: Wash his hands regularly, stop him from picking at the sore (you might want to put mittens or socks on his hands while he sleeps), and don't let him share toys, drinks, or eating utensils.

And most importantly of all? No kissing babies allowed.