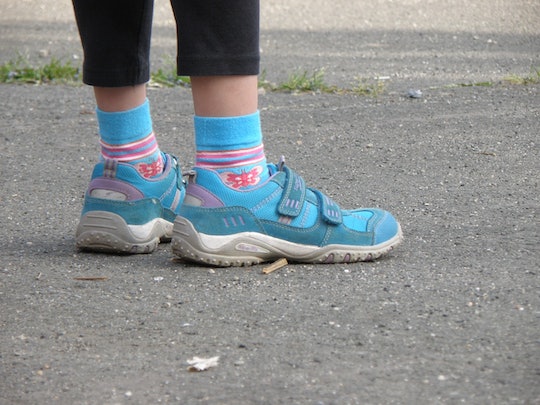 Can Toddlers' Light-Up Shoes Start Fires? One Texas Family Had A Terrifying Experience

If I'm going to buy a new pair of shoes for my kiddo, all things being equal, I'll usually get much more excited about the pair of light-up shoes over the more standard, non-blinking affair. But it turns out they might be just as dangerous as they are fun to wear. Light up shoes are powered by lithium batteries, which have been known to short out and burst into flames. So can toddler light up shoes start fires? One Houston-area family SUV recently caught fire, and they believe the shoes might be to blame. Payless, where the family says it bought the shoes, told Romper in an email statement that it did not wish to comment.

Attila and Jovan Virag noticed smoke inside their SUV, ran over to the vehicle and opened the door. That's when they smelled burning plastic. A fire broke out in the backseat, burned a hole through the floor board of the SUV and melted the passenger seat. So what was back there that could have started the fire? "Only shoes and clothes," Jovan said.

After the family called the fire department out, a possible source of the fire was determined — the couple's 2-and-a-half-year-old son Warren's new favorite Jake and the Neverland Pirates light up shoes they had just bought a few days earlier at Payless, according to a report from KHOU news.

After taking apart the shoe that didn't burn, dad Attila realized the flashing lights in the shoes are powered by a lithium battery, which are well known to short out and start fires. After hover boards became a super popular gift last Christmas, several fires ignited as a result of lithium battery shorts. The Federal Aviation Administration has issued warnings that lithium battery fires pose a serious risk to air travel. So if we already know lithium batteries are potentially deadly, why in the world would manufacturers load them into shoes worn by small children? The Virag family is speaking out to let other families know of the potential risk. I certainly never would have guessed children's shoes could be a fire hazard. In fact, I always assumed the lights on the shoes kept kids safer at night. I guess I can file that under "another thing mom got totally wrong this week."

As for the Virag family, they're safe, but Jovan expressed what I imagine is every mother's worst fear about the potential dangers of shoes for toddlers that might catch fire.

"I'm just glad that my son wasn't wearing it at the time," Jovan said. "I don't know if he could have told me his foot was getting hot, and I don't think he could have taken it off by himself."