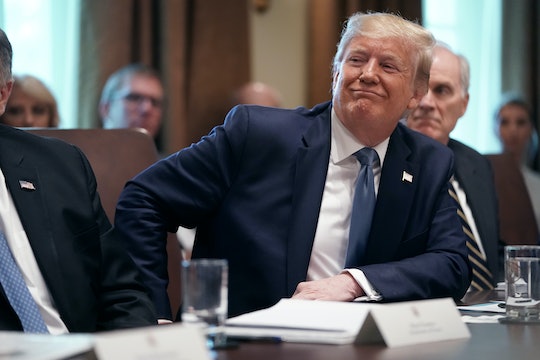 The House Won't Be Moving Forward With Efforts To Impeach Trump

Shortly after the House passed a resolution condemning President Donald Trump's attacks on four congresswomen of color as racist on Tuesday, a Democratic congressman from Texas filed impeachment articles against the POTUS in a direct challenge to his leadership. But can Trump be impeached? According to NBC News, the House held a vote to start impeachment proceedings on Wednesday, but ultimately rejected to move forward with the measure.

Ahead of Wednesday's vote, Democratic Rep. Al Green said Tuesday in a speech on the House floor, "What do you do when the leader of the free world is a racist? Well, here's what you do. You file a resolution condemning the president for racist comments directed at Members of Congress. What do you do? You file Articles of Impeachment, impeaching the president of the United States of America."

In a separate statement released earlier in the week, Green argued that Trump was "a racist, a bigot, a misogynist, as well as an invidious prevaricator." He went on to claim that Trump was "unfit for public office," arguing that most private companies would have terminated him for the behavior he's exhibited. "How long will we stand idly by as he denigrates his constituents, decimates our democracy, and damages America’s global standing?" Green asked.

This is the third time Green has introduced articles of impeachment against Trump in the House and used what's known as a privileged resolution to force a vote within two days, according to the congressman's office. In both previous votes, which occurred in December 2017 and January 2018, the majority of House members voted to table the resolution, like they did today.

While Green's most recent push for impeachment is the first time he has moved to force a vote on the issue since Democrats took control of the House, Democratic Party leaders have so far appeared unwilling to embrace launching impeachment proceedings against Trump. According to POLITICO, Speaker of the House Nancy Pelosi told reporters she did not support Green's push for impeachment when asked about it Wednesday. "Does that come as a surprise?" the news outlet reported she added.

In comments to The Hill, House Majority Leader Steny Hoyer said he thought impeachment was "premature" but that Congressional Democratic leaders were still working out how to handle Green's resolution. "I think we need to hear from [Former special counsel Robert Mueller] and analyze what he had to say," The Hill reported Hoyer said. "I think there's a lot of information to come, and we'll see — as the Speaker has said — where it leads us." Mueller is expected to testify before Congress sometime next week regarding allegations that Trump obstructed justice during the investigation into Russia's election meddling.

But not every Democrat in Congress is opposed to the idea of launching impeachment proceedings against Trump, as evidenced by Wednesday's vote. Before the House voted, 86 Democrats and one Independent in Congress had said they would support an impeachment inquiry, according to the nonprofit progressive fundraising organization ActBlue.

With Wednesday's vote out of the way, only time will tell how whether more efforts to launch impeachment proceedings will follow.