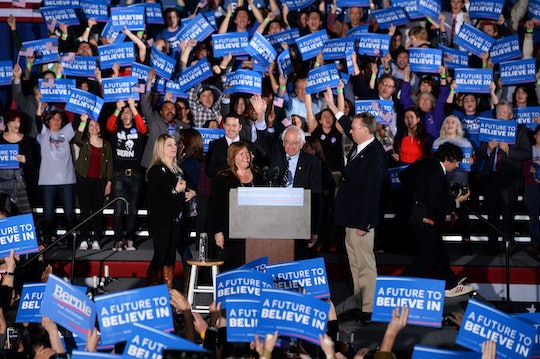 Can Trump Convince Bernie Sanders' Supporters To Vote For Him?

With Hillary Clinton clinching the Democratic nomination, and Bernie Sanders' concession all but official, many are left wondering what will happen to the legions of Sanders supporters left over. Republican presidential candidate Donald Trump reached out to Sanders voters in a speech on Tuesday saying, "To all those Bernie Sanders voters who have been left out in the cold by a rigged system of superdelegates, we welcome you with open arms." The presumptive nominee hopes to use his populist candidacy to pull over some of Sanders' anti-establishment voters. However, there is still a question of whether Trump can actually convince Bernie Sanders supporters to vote for him come November.

Bernie Sanders is believed to be conceding the Democratic primary race to Hillary Clinton within the next week. This move will leave his ardent supporters without a leader or tribe during an election season full of tribal politics. Those voters who have felt “the Bern” are going to need to decide whom they will support come the general election in November. Though the logical choice for a group of young, educated liberals would seem to be presumptive Democratic nominee Hillary Clinton, some Sanders supporters have been threatening to defect and vote for presumptive Republican nominee Donald Trump. (Yes, that Donald Trump.) And the billionaire is happily eager for them to hop over the aisle.

While Clinton seems eager to attract Republican and Independent members of the #NeverTrump movement over to her side, Trump is trying to recruit disaffected Sanders supporters. His argument? By voting from Trump, Bernie Sander’s followers would be “getting even with” Clinton, presumably for winning the primary (how dare she!) and for cheating the system.

Speaking to Sanders supporters, Trump repeated his anti-establishment refrain. “To all those Bernie Sanders voters who have been left out in the cold by a rigged system of superdelegates, we welcome you with open arms,” he said. “We can’t solve our problems by counting on the politicians who created our problems,” he added. “The Clintons have turned the politics of personal enrichment into an art form for themselves."

It would seem Trump's biggest argument to Sanders voters is the old adage: the enemy of my enemy is my friend. Of course, he misses the fact that Sanders supporters don't like him any more, and actually a lot less, than they like Clinton.

Speaking from Briarcliff Manor, New York, Trump tried to distance himself from career politicians like Clinton. "Why would politicians want to change a system that has made them and their friends very, very rich?" Trump asked the crowd. The anti-establishment sentiment has been a friend to the Apprentice star's presidential campaign, so why shouldn't he use it to recruit supporters of the only other political outsider candidate?

Reading from a teleprompter (an unusual move for the billionaire who is famous for his off the cuff speeches), he told the crowd in New York that Sanders had the right idea about trade agreements, promising that when he gets into the White House, "we are going to have fantastic trade deals." Because nothing will attract idealistic young voters like tariffs and import taxes.

The real estate mogul is obviously hoping Sanders followers have problems with short term memory and that they will forget the racist and misogynistic things he has said in the past.

History tells us that the burned Bernie Sanders supporters (sorry, I had to) will come around and end up voting for Hillary Clinton in the general election. At this same point in the 2008 election season, 26 percent of Clinton supporters said they would vote for Republican nominee John McCain and not Barack Obama if he became the Democratic nominee. According to a May Washington Post-ABC News poll, the number of Sanders supporters who would vote for Donald Trump over Hillary Clinton is only 20 percent. While the difference between those percentage points are not statistically significant, they do show that discord within the Democratic base is no greater now than it was back then. Sure those Clinton supporters were angry and skeptical towards the Illinois senator but they eventually came around and helped Obama take the White House.

Hillary Clinton is confident that Sanders' supporters will stay with the Democratic party to prevent Trump from ever sitting in the Oval Office. "As we reach out and we talk about what's at stake in this election, I really believe a lot of Senator Sanders' supporters will join us in making sure Donald Trump doesn't get anywhere near the White House," she told CNN's Anderson Cooper.

Donald Trump is in a precarious situation as he pivots from the primary to the general election: he needs to ingratiate himself to the Republican establishment while broadening his appeal outside his (mostly white, uneducated) base. In order to do so, he will need to tone down his bravado and shift towards policy and away from insult-politics. Unfortunately, so far, he has been unable to stay on message; last week, he earned the ire of politicians and voters on both sides of the aisle for suggesting that a judge presiding over a lawsuit he is involved in should recuse himself because he is "Mexican" (the judge in question, Gonzalo Curiel, was born in Indiana).

For his part, Bernie Sanders vows that he will do "everything in my power to make sure that no Republican gets into the White House." He even went so far to suggest his true followers would never support Donald Trump's bid for president.

Maybe by appealing to Sanders' followers, Trump is onto something. Maybe the Vermont senator's supporters will be so angry at their candidate's loss that they will defect and vote for a brash, racist over a progressive Democrat with very little difference in policy to Senator Sanders. Or, maybe history will predict the future once again and the "Bernie Bros" will come around to support Clinton in the end. .

More Like This
Ketanji Brown Jackson Spoke Directly To Her Daughters In Her Powerful Opening Statement
Here's Why 'Mean Girls' Is A Fetch Movie Choice For Families With Teens
The Summer I Turned Pretty Is Officially Returning For Season 2
'Clueless' Is, Like, Totally Still A Good Teen Movie In 2022